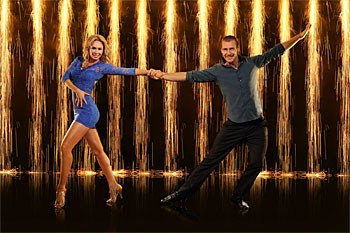 Ingo Rademacher danced a Contemporary dance, on the premiere of Dancing with the Stars: 2013 performance show tonight.  DWTS is back with an all-new cast of fresh faces hitting the dance floor. This season features two new dance styles, contemporary and jazz; three new professional dance partners — Lindsay Arnold, Sharna Burgess & Gleb Savchenko; and notable theme shows.  If you missed the show, we recapped tonight’s show for you and if you want to see how all the couples did go HERE!

Ingo Rademacher and professional dancer Kym Johnson dancing a Contemporary routine.  Ingo had this to say about winning DWTS, “I can’t say that [but] it would be great. We gotta take it week by week and see where it goes. I’m really excited to get out there. I want to get the first Monday night [performance] over with already!.”

Judges’ Comments: Len: “He’s not convinced about that performance at all. Come out and show him dance!”  Bruno: “That was good. He thought he was watching Bradley Cooper in “Silver Linings Playbook”  Carrie Ann: “She wants to see the raw passion and she saw that. They did a great job.”