BY Kristine Francis on May 13, 2013 | Comments: 3 comments
Related : Dancing With the stars, Dancing With The Stars Season 16, Performance Videos, Reality TV, Television 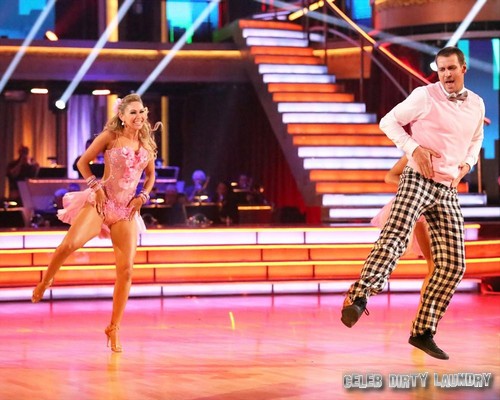 INGO RADEMACHER danced a SAMBA on the semifinals episode of DANCING WITH THE STARS: 2013 performance show tonight. On this week’s show the six remaining couples performed two routines, inching their way one step closer to the coveted mirror ball trophy.   If you missed the show, we recapped tonight’s show for you and if you want to see how all the couples did go HERE!

In the first round, the remaining couples will dance a dance that twitter users voted on.  [VIDEO HERE] It will be either a Flamenco, Charleston, Afro Jazz, Lindy Hop and Hip Hop.  The second dance will be a ballroom or Latin style dance they have yet to perform this season.

Judges comments: Bruno: “I love your determination, you don’t give up.  You went from one extreme from the other, you put the work in, you lost the timing.  Don’t force it.”  Carrie Ann: “I have never seen more sway hip roll.  You are the underdog but you have to step it up a bit more!”  Len: “You know through the darkest cloud, a ray of sunshine comes through.  I thought you did a good job.  Well done, good job!”