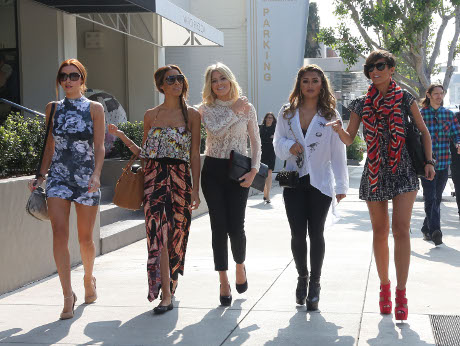 Una Healy, Rochelle Humes, Mollie King, Frankie Sandford, and Vanessa White formed in 2007 and have since then become one of the most loved girl groups in the UK. Known collectively as “The Saturdays”, these five girls have achieved astounding success in the British music industry. However, seeing that the British Invasion is taking place in the USA, it would only be fitting to have these girls join in on the fun.

Their E! Entertainment reality show, “Chasing The Saturdays”, airing on Sunday, the 20th of January, 2013, will see The Saturdays make their break in the biggest music industry in the world – the United States.  The 10-episode series will chronicle both the personal and professional lives of these talented young women.

According to the official E! Entertainment synopsis:

The series’ inaugural season focuses on the band taking up residence in Los Angeles where they will live, work and play together as they expand their incredibly successful music careers and break into the American music market.  As soon as The Saturdays arrive in style to their new home, they immediately head into the recording studio to begin working on their album — the first to be released internationally. Cameras will follow as they shoot the music video for their first American single, “What About Us,” featuring the Grammy-winning reggae artist Sean Paul.

Celeb Dirty Laundry had the privilege to interview The Saturdays about where they see themselves in the music industry and what type of difficulties they encounter while doing their sold-out tours.

As an all girl group, what are some of the biggest obstacles you face while on tour?

Well, being a girl group there’s obviously loads of costume changes. We like to sort of mix up our outfits and when we’ve been on tour we each have about four outfits so there’s, you know, a lot of dresses and everything being traveled and that means our quick changes backstage are absolutely manic. And we have a makeup and hair stylist backstage as well so they’re always quite manic, there’s just a lot going on back there.

Where do you want to be in the industry in five years time?

We’ve been together for five years and we see at least another five in us. So definitely, not just coming to America but everywhere in the world.

If there is any musician living or dead that you could collaborate with who would it be and why?

What is the most memorable experience you’ve had in your career?

I think one of the most memorable is definitely when we went on our headline arena tour, sorry back home. It was just amazing I don’t think we still can believe that we managed to set out doing it.

What were you often worried about when becoming into the world of reality TV, what’s your biggest fear on that?

I think we were quite anxious just at the beginning because, you know, we knew that we were going to let the – the cameras completely with our lives and obviously that was a little bit daunting but we did also know at the same time that if we were going to do a reality show then we have to give them everything. You know, people want to see everything these days so it’s been a really exciting journey for us. And we got to the point where, you know, you kind of forget the cameras are there because we got so used to it so we definitely overcame that fear.

You can catch the two-hour premiere of Chasing The Saturdays on the 20th of January, 2013, EXCLUSIVELY on E! Entertainment. Check your local listings for more information.

Check out a great video of The Saturdays by clicking on