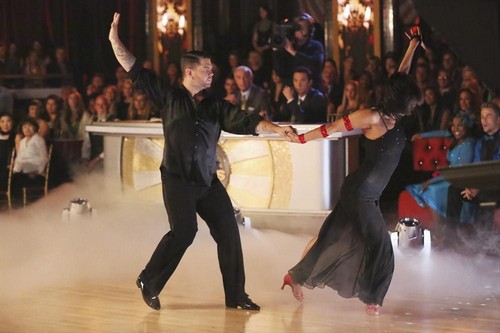 Jack Osbourne danced a Cha Cha Cha, on tonight’s “Hollywood Night” episode of Dancing with the Stars.   To check out Jack’s DWTS bio [CLICK HERE] If you missed tonight’s show you can read a full and detailed recap, right here.

On last week’s show Jack was given a 24/30 for his Rumba routine.  Carrie Ann said this about his dance, “What I love about you is you transform me to another time.  It is beautiful.”  If you missed any of last week’s performances, you can check out all the videos, right HERE.

Jack Osbourne and professional dancer Cheryl Burke: danced a Cha Cha Cha.  Cheryl said about this week, “It has been rough because now the competition seperates , you only have a few days to learn your new dance.  Previously we had 3 weeks to prepare for our dance.  Now we will be able to see the difference of who can actually stay in the competition.

Judges comments: Bruno “It was cheeky Jack, I loved the rock star opening, very ambitious and you kept your timing. Just watch your hip action”. Carrie Ann “It was good, but not your best. You are taking big steps, watch your arms because they are not in hold”. Len “I love your commitment, you come out and give it plenty. It all had a bit too much movement, but keep it up and give it everything you’ve got”.