Jack Osbourne Loves Dancing With The Stars: Platform to Educate about Multiple Sclerosis 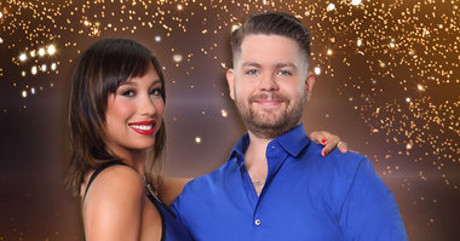 Jack Osbourne has had a real roller coaster of a life in the last year and a half. The reality star has been diagnosed with Multiple Sclerosis, had a daughter, gotten married and then recently his wife Lisa miscarried baby number two. That all amounts to a lot of change and emotional upheaval in a relatively short period of time and some people wouldn’t know how to channel the feelings involved.

According to the Oct. 7th print edition of Life & Style magazine Jack is absolutely thrilled to be a contestant on the new season of Dancing With The Stars. The fast past schedule is keeping Jack really busy with rehearsal’s and he is having a blast with his pro partner, Cheryl Burke. He is thriving in his new daily routine and then looks forward to coming home to his wife and daughter when the day is over.

One of the main reasons that Jack agreed to do this season of DWTS is because it allowed him to help educate the general public about MS which is an autoimmune disease that affects the brain and spinal cord. There is no cure and a person’s life expectancy can be shortened for those with the disease as much as 10 years. According to Jack a person suffering from the disease never ultimately ends up in a good situation and so it’s really important for people to keep donating money and energy towards finding a cure.

As for Jack on DWTS, are you a fan? Do you think that Cheryl will whip him in to shape and they’ll end up in mirrorball trophy contention? Tell us your thoughts in the comments below!