BY Annemarie LeBlanc on May 13, 2013 | Comments: 2 comments
Related : Dancing With the stars, Dancing With The Stars Season 16, Performance Videos, Reality TV, Television 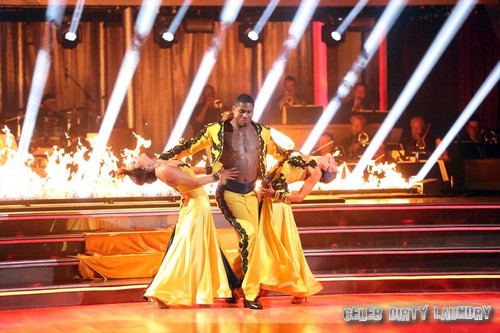 JACOBY JONES danced a ARGENTINE TANGO on the semifinals episode of DANCING WITH THE STARS: 2013 performance show tonight. On this week’s show the six remaining couples performed two routines, inching their way one step closer to the coveted mirror ball trophy.   If you missed the show, we recapped tonight’s show for you and if you want to see how all the couples did go HERE!

In the first round, the remaining couples will dance a dance that twitter users voted on.  It will be either a Flamenco, Charleston, Afro Jazz, Lindy Hop and Hip Hop.  The second dance will be a ballroom or Latin style dance they have yet to perform this season.

Judges comments: Len: “That is what I am talking about, mood and intensity.  Right on the money, that was great!”  Bruno: “The sexual tension was unbearable.  I have to point on thing out it was so slick and so clean.  You demonstrated you have control.  Best performance ever.”  Carrie Ann: “I got heated up again. [While Carrie Ann did some kind of crazy hair flip]”