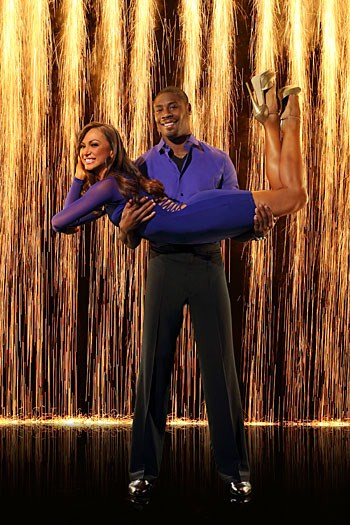 Jacoby Jones danced a Cha Cha Cha, on the premiere of Dancing with the Stars: 2013 performance show tonight.    DWTS is back with an all-new cast of fresh faces hitting the dance floor. This season features two new dance styles, contemporary and jazz; three new professional dance partners — Lindsay Arnold, Sharna Burgess & Gleb Savchenko; and notable theme shows.  If you missed the show, we recapped tonight’s show for you and if you want to see how all the couples did go HERE!

Jacoby Jones and professional dancer Karina Smirnoff dancing a Cha Cha Cha.  Jones knew nothing of the cha-cha before the other day — except that it was a dance. Worse yet, all the other teams had nearly a two-week head start on practice while Jones recovered from knee surgery.

Judges’ Comments: Len: “It was all icing and no cake and the technique was terrible.”  Bruno: “He has the potential to be the season 16 champion, but he has to control his posture.”  Carrie Ann: “She loved it, he’s got the moves.”