BY Annemarie LeBlanc on May 6, 2013 | Comments: 2 comments
Related : Dancing With the stars, Dancing With The Stars Season 16, Performance Videos, Reality TV, Television 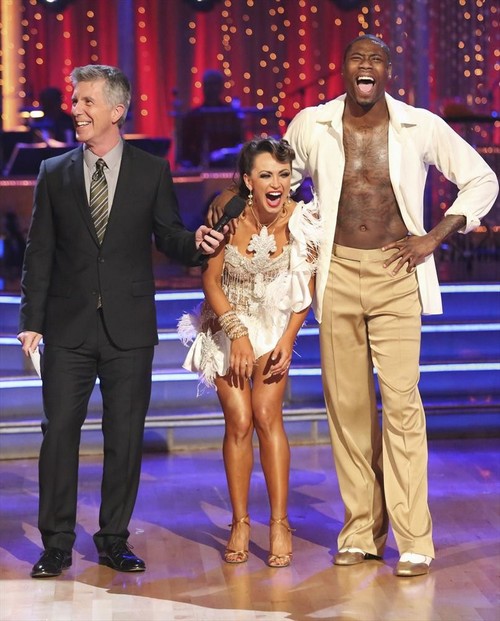 JACOBY JONES danced a PASO DOBLE for his trio dance with his partner Karina Smirnoff and professional dancer Cheryl Burke on the eighth episode of DANCING WITH THE STARS: 2013 performance show tonight. On this week’s show the six remaining couples took to the dance floor and for the first time this season, each couple had to perform two routines in an effort to impress the judges and earn America’s votes.  If you missed the show, we recapped tonight’s show for you and if you want to see how all the couples did go HERE!

In the first round, the couples performed a traditional ballroom dance in a style that they’ve not yet done. Did you see his first dance?  We have the video for you.  [VIDEO] In the second round, the couples will dance as part of a trio, featuring an eliminated pro or troupe member. In addition, viewers will be called to action on Twitter to choose new dance styles for each couple for the following week of competition. The new styles will include, Afro-Jazz, Disco, Flamenco, Hip-hop, Lindyhop and Charleston.

Judges comments: Carrie Ann: “You have such an impressive presence on the floor.  It was really good.  The man is suppose to take care of their women on the dance floor.  We wanted a little more finesse.”  Len: “You came out with fantastic presence.  I loved the spins.  you have become a contender!”  Bruno: “Raw, powerful, untamed.  It just splattered everywhere.  You have sort out the Spanish lines.”