Jennifer Aniston Covers Glamour Magazine’s Hollywood Issue: Is She Hot or Not? (PHOTO) 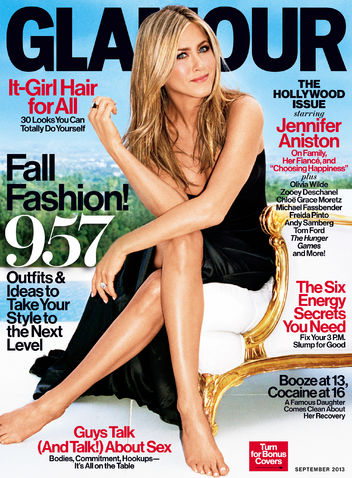 I don’t understand the fascination with Jennifer Aniston. She has a pretty face but that’s all she has to offer. The only reason Jennifer became so famous is because she married Brad Pitt. Almost a decade after their divorce she is still the object of fascination due to a love triangle with her ex and his soul mate Angelina Jolie.

Despite her lack of talent and personality, Glamour Magazine made Jennifer their September 2013 cover girl. This is their Hollywood Glamour issue. Jen is in no way Glamourous. She was chosen as the cover girl because the public is fascinated by her and she sells magazines.

Glamour made three Jennifer covers for their Hollywood Glamour issue. The front cover shows Jen in a black dress and barefoot. Her hair is frosty blond and stringy. Jen’s hands and feet were re-touched because they are so veiny. The other two covers have Jennifer trying to look playful and wearing two different cute sweaters. It was a waste of film. You could see she was posing and not relaxed. Jen’s smile is too big. If she truly was being playful you would see it in her eyes, not a big cheesey grin. Jen over compensated because she photographs poorly.

In every photo for the story her blond hair makes her look washed out. It does not compliment her golden complexion. If Jen insists on keeping her hair lightened she may want to consider picking a shade of blond that is more natural. The magazine’s makeup artist should have given her a pop of color with her make up choices. Jen is always in neutral eye and lip colors, even on the red carpet. This is her trademark look and it is beyond boring.

The article is actually an interview with Jennifer’s “We’re the Millers” co-star Jason Sudeikis. He asks her a lot of basic questions and she gives unremarkable answers. The headline on the magazine cover says Jennifer tells all but she doesn’t say anything we haven’t heard before. Jennifer also passive aggressively disses Brad. She says in her 30s she needed therapy to rid herself of toxins and get her head together. Jen was obviously referring to her failed marriage that ended in 2005.

Brad recently took a swipe at their marriage in an interview and Jen did not want to be one-upped. Jason asked Jen how she got started as an actress. She said she liked being funny in school to mask the pain of her parents divorce. She attended the High School of Performing Arts in New York City where she got a foundation in acting. Her parents must have paid off someone to get her into that school. Students are admitted based on their auditions. Since Jen is neither funny nor talented at anything other than showing off her body this is the only possible explanation for her admittance.

In addition to being a cover girl you will see Jen in her two newest ad campaigns. She recently became the spokesperson for Aveeno and Full Proof hair products. Jen is almost as bad as the Kardashians when it comes to endorsements. Every year she is selling something else. I’m surprised I didn’t see her Smart Water campaign in this magazine, too.

This week Hollywood Life gushed about how pretty Jen is in this magazine feature. I just don’t see it. She is too skinny and has no curves. Because Jen is so thin the veins in her hands and feet can be seen prominently. Jen has had the same hair color and hair style since she left Friends 10 years ago. She has no fashion sense. She told Jason in the interview that she wears a uniform when she is not working. Today Hollywood Life was at it again, going on and on about Jen being a natural beauty. Her BFF and hairstylist Chris McMillian posted a selfie of the two of them on Instagram and Jen was sans makeup. Hollywood Life made her out to be so brave to pose for this picture. Give me a break.

If you decide to pick up this issue of Glamour do it for photo spread featuring Chole Grace Moretz. She is made up on gorgeous old Hollywood hair and makeup. This is how its done, Jen!