Jennifer Aniston Shows Her Sexiness, Strips Down In ‘We’re The Millers’ Trailer (VIDEO) 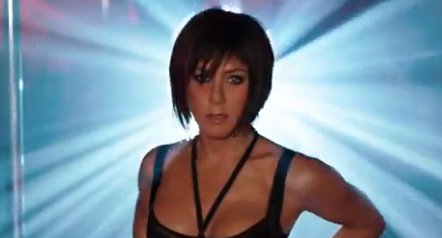 So this is what Jennifer Aniston’s career has come to, pretending to be a stripper in a comedy about a pretend family smuggling drugs across the border? Ok, not to knock on the movie because the trailer for ‘We’re The Millers’ looks decently funny, but the fact that Aniston’s character is a stripper in the film is a bit telling.

If any of you have noticed, a lot of her recent roles have tried to play up her sex appeal, including Horrible Bosses and Wanderlust. I think Jennifer’s completely forgotten where her appeal comes from – which is Rachel from ‘Friends’. No matter how hard she tries, she will never escape it and the simple fact of the matter is, the movies where she plays characters similar to Rachel always do better than the ones where she tries to be ‘sexy’.

For example, she definitely plays against type in both ‘Wanderlust’ and ‘Just Go With It’, two movies that completely flopped at the box office. But when she played her ‘girl next door’ schtick in ‘Marley & Me’ and ‘The Break Up’, the films performed well at the box office. Of course, there are exceptions like ‘Horrible Bosses’, but her role in that film barely amounted to little more than a cameo.

In the end, Aniston’s appeal has always been as the jilted girl next door, and trying to be Angelina Jolie will never get her anywhere. I’m sure there’s a sizeable audience who want to see Aniston get naked and strip, but that same audience will download the movie illegally as soon as it comes out in theaters, not pay to go see it in theaters. Jennifer Aniston trying to be sexy is never going to work for her, and certainly not in this manner.