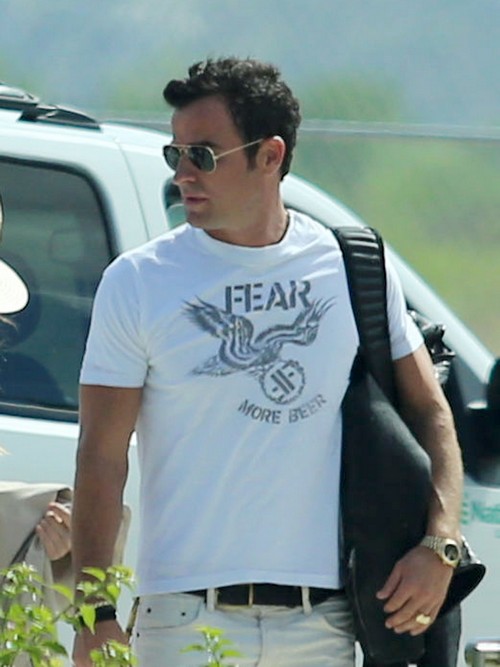 Well, these two have been stuck to the tabloids like a sad person is stuck to self-help books. Jen Aniston’s love life is a cursed affair, but it seems that her relationship with Theroux is more stable and controlled than her relationship with Brad Pitt. It is also possible that Theroux is actually Medusa with a facelift and that his chiselled features act as a beacon for ingénues without hearts.

Aniston had a heart, but then hot legs McGee, otherwise known as Angelina Jolie, ripped it out of her chest and trampled on it like a sad Sicilian tramples grapes.

An eyewitness told Star magazine, “Because it was a family event, people were stunned to see that Jennifer didn’t attend with Justin.”

The magazine alleges that “eyebrows were raised even further when Justin was spotted getting affectionate with an attractive blonde, even sharing an embrace with the mystery woman.”

“He gave her a friendly kiss and a hug when she walked up, which is normal. But what was abnormal was the fact that they were touchy-feely and stood around with their arms around each other. Justin’s close affection with the blonde was definitely the talk of the party,” so says a source with an Angela Lansbury obsession.

Aniston is one break-up away from becoming Nell. She’ll munch on bat legs and Demi Moore in a cold cave while Naomi Watts dances naked around a pile of burning Diana DVD’s.

Oh, wait, that saying was applicable in the 90’s.

What do you think readers? Do you think Theroux is cheating on his woman? Will they survive? Let us know your thoughts in the comments below.