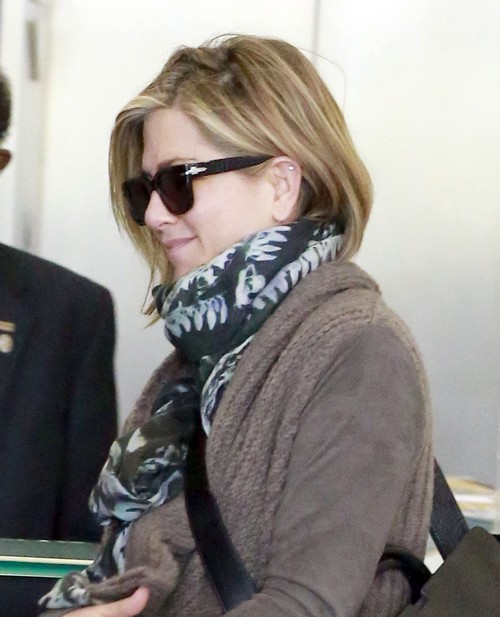 Yes, it’s pretty obvious that Jennifer Aniston is going through a midlife crisis of some kind, but she would like us all to believe that these risks that she’s taking are very calculated. A few weeks ago she broke out of her many-years-long style rut and decided to chop off her hair into an A-line bob. The last time Jen’s hair was like this she talked endlessly about how much she hated it. This time around it was likely a typical female reaction to a messy breakup. I mean, who hasn’t cut their hair off as a way to feel like something other than the sad, broken hearted girl? It’s a classic move and we know that her engagement to Justin Theroux is on ice All indications are that the couple has split and are delaying the formal announcement.

But let’s play along with Jen for a bit. She wants us to believe this revamping of her image is on purpose, so much so that according to Radar she has placed herself in the hands of style guru Kate Young. Together they seem to believe that an edgier Jen will rub off on middle America and every 40-something year old woman will run to get her cartilage pierced just like Jen’s! I suspect this will backfire and eventually Jen will wake up missing her fiance, the babies they never had and all of those $5,000 dresses that she cut up so that they couldn’t end up being hawked on Ebay!

Perhaps if Jen really had an edge to her rather than opting to stay at home on her couch, Justin might have fought for their relationship. Instead he has been working in NYC for months and let me tell you from the photos I’ve seen, he is over the moon to be single again. So, are we buying that Jen’s makeover is a carefully plotted move? Or did she simply bring Kate in to help clean up the mess? Tell us your thoughts in the comments below!