Jennifer Aniston Pregnant At Last! In Vitro Fertilization Baby On The Way (Photo) 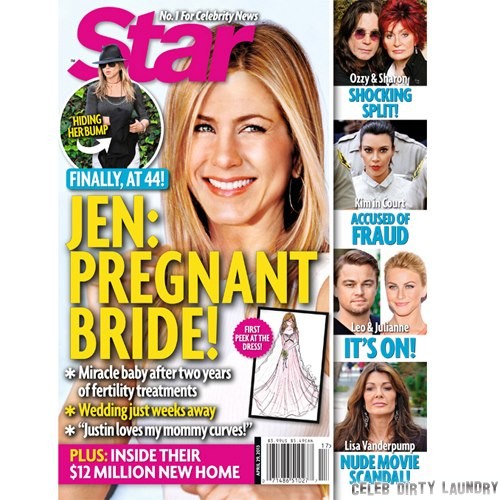 Jennifer Aniston appears on the latest cover of Star magazine and for the gazillionth time, she is pregnant! Shocking, we know!

If the tabloids were ever right about Jennifer’s baby prospects, she would have had about 20 kids by now. Ha. At 44-years-old, the tabloid claims that Jennifer is finally pregnant. The former Friends actress is finally knocked up after two reported years of fertility treatments.

In addition to being pregnant, the magazine claims that her wedding to Justin Theroux is merely weeks away. So, she’ll be a pregnant bride! Lastly, there’s a reported quote that “Justin loves my mommy curves!”

Uh huh. We’re skeptical, of course. The magazine’s source said, “She actually started having fertility treatments six months into her relationship with Justin. Almost two years after beginning the in-vitro process, Jen and Justin received the happy news they’d been waiting for. Between the frozen eggs and the fertility treatments, she was hoping to get lucky, but she tried not to think about it too much because of the disappointment.”

Their snitch added, “When she found out it worked and she is having a baby, she burst into tears. To say she is happy doesn’t come close! This means everything to Jen.”