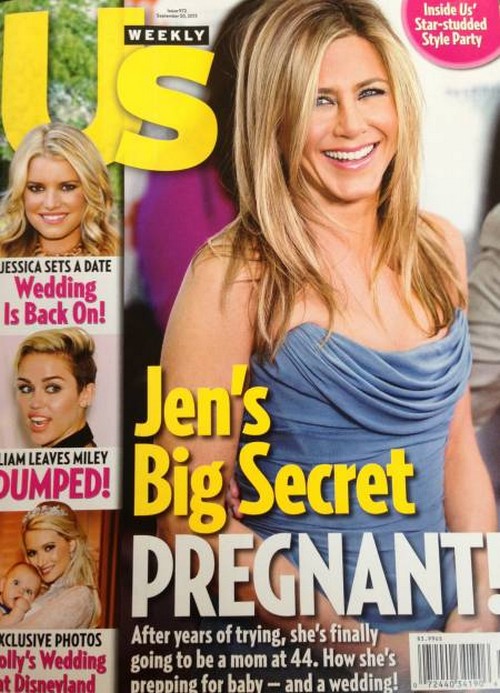 I know, we have been saying for months that Jennifer Aniston looks pregnant, is pregnant or at the very least has gained weight in order to have a baby. Last time the rumors swirled a few months ago when Jen showed up on Chelsea Handler’s couch looking bloated only to hit the red carpet a day later with what appeared to be a baby bump. That may have been a false alarm but according to the Sept. 30th print edition of US Weekly the difference that several weeks can make is massive, as Jen now really is expecting a baby with Justin Theroux.

The former Friend’s star appears to have undergone several rounds of IVF treatments in order to finally conceive and that is what has caused the obvious changes to her appearance. It looks like the needles and bloating have paid off though if Jen is gearing up to be a first time mother at 44-years old.

Also in the latest issue you can get all of the details on how Liam Hemsworth dumped Miley Cyrus once and for all. I don’t think anyone is surprised to learn that the blooming A-List actor slowly but surely navigated himself away from the Twerk Team captain that Miley has become. He wants respect and she is simply a joke that he can’t have on his arm so the engagement is off.

One wedding that’s still a go however is Jessica Simpson and Eric Johnson’s. After having two babies within two years they are now taking steps towards making it official. Do you think that they will eventually walk down that aisle? Tell us your thoughts in the comments below!

Image Credit: Us Weekly and FameFlynet