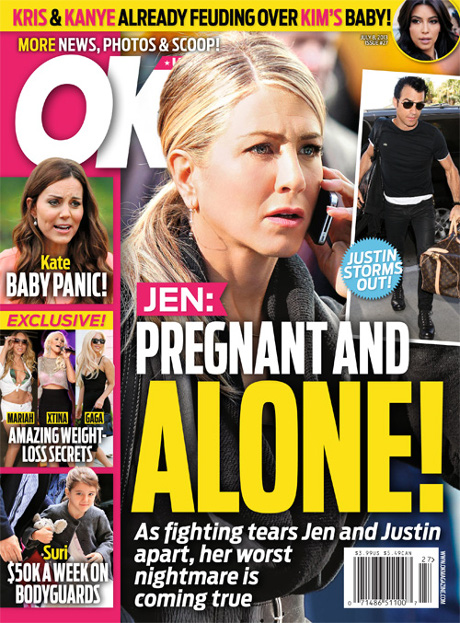 Poor Jennifer Aniston. Now tabloids are claiming that she’s pregnant and on the verge of finding herself all alone — again! Earlier we reported that Jennifer Aniston completely shot down Justin Theroux‘s proposal to split their time between New York and L.A. That report said that they were relatively happy together, despite that little disagreement, but upon the release of OK! Magazine’s newest cover, perhaps there really is trouble in Aniston’s paradise?

The mag claims that Justin stormed out after fighting tore their relationship apart. Honestly, we don’t know what to believe anymore where Aniston is concerned.

One moment she’s pregnant with triplets and the next moment she’s supposedly found the love of her life and hopes to start a big family in the future. If the relationship has found itself in jeopardy, then we hope the couple figures their stuff out sooner rather than later because out of all the celebs in the world that we’d finally like to see married it’s definitely Jennifer. Just make it happen. Will a Jennifer Aniston marriage ever happen?

Other stories in the magazine involve Kate Middleton, who’s found herself in a panic pre-delivery, and amazing weight loss secrets. There’s also a bit in there about Kim Kardashian’s baby, which seems to be stirring some drama between Kim and Kanye. Nothing new. We’re going to be reading about North West until the sun stops shining. Maybe there will actually come a time when the Kardashians don’t matter, but right now, in this moment, people can’t get enough of their stories.

Surprisingly, this magazine doesn’t feature Paula Deen on the cover. But I’m sure there’s a little snippet of a story hiding somewhere in the mag.

What do you think of this alleged drama featuring Jen Aniston? Let us know in the comments section below and be sure to get yourself a copy of the new magazine!