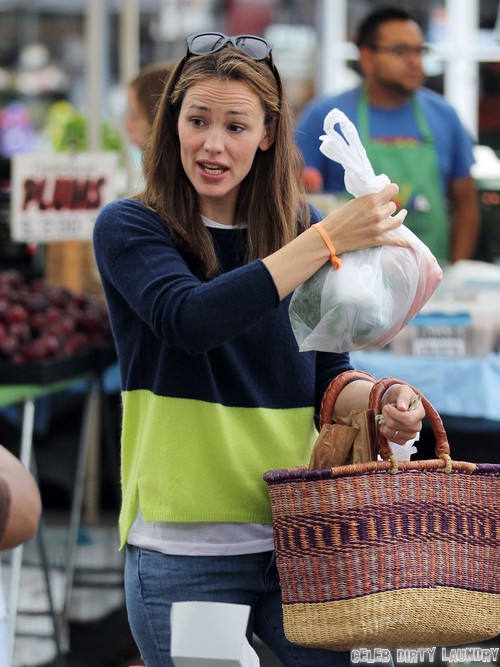 Is Jennifer Garner pregnant again? It certainly looked like that when the actress was spotted sporting a visible baby bump at the supermarket the other day. Look, I’m not a fan of the pregnancy bump guessing game – I think it’s rude to call people pregnant just because they’ve eaten a lot of food and they’re sporting a bit of a stomach that day. And specifically in Jennifer’s case, the tabloids love to call her pregnant, regardless of whether she has a baby bump or not.

But with all that being said, the pictures here are definitely suspicious. She was spotted after the birth of her son looking pretty skinny with a flat stomach so it’s not like she’s still losing her pregnancy weight. And in the pictures, the buttons to her pant are opened and she’s sporting a lump in the same place a pregnancy bump would exist.

I mean, she also layered her sweater so it could just be a draft of air that’s creating an unfortunate shape, and she could have just eaten a lot for lunch and unbuttoned the top button of her jeans. Goodness knows, I’ve done that enough times. But again, it’s curious.

I don’t think any of this evidence is enough to scream PREGNANT!, but I definitely think there’s a possibility this time. At least the tabloids aren’t just shouting pregnant for the sake of shouting pregnant. They have a picture set to go along with their next issue.

And what about Ben Affleck?  Is he making sure Jen can never have a career other than being a mom? Does he want to make sure that the nest never empties? What do you guys think? Is Jennifer Garner pregnant or are the pictures misleading? Let us know your thoughts in the comments.