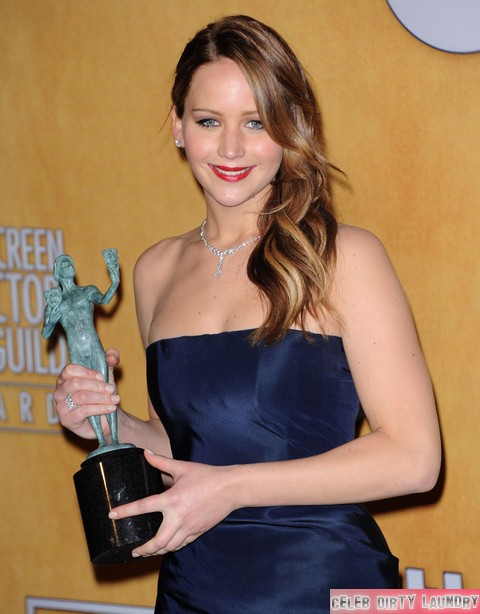 We’ve heard that Angelina Jolie has added Jennifer Lawrence to her list of actresses who threaten her career—apparently, Angie wanted the starring role in Silver Linings Playbook, for which Jennifer has earned an Oscar nomination. Either the feud is false, or it hasn’t reached Jennifer’s ears yet! The star of The Hunger Games has no hesitations when it comes to spilling her weird secrets and unexpected obsessions, one of which is Angelina!

“Brad Pitt and Angelina Jolie were two feet from my table [at the Golden Globes],” Jennifer gushed. “It changes you. I have heart palpitations.” It is so fresh to see a celeb—who really went from 0 to 60 in ten seconds flat—be such a fangirl! It isn’t just Angie’s acting that has Jennifer fawning! She’s smitten by her entire image and lifestyle! “They should be king and queen of America,” she insisted. “I would pay taxes to them and not even think twice about it.”

As if Jennifer’s praise of Angelina and Brad weren’t adorable—and hilarious—enough, the star also dished on some embarrassing habits. Star Magazine, print edition February 4, 2013, reported her secret. “If I don’t have anything to do all day, I might not even put pants on,” Jen confessed. I guess it’s true: stars really are just like us! It’s unsettling to think that they wake up with perfectly styled hair, carefully lined brows, and moisturized cuticles! Though Jen’s aversion to pants may be a bit much, it’s great to see her humanity!

Despite her stellar success, Jennifer isn’t about to own up to it. She admitted that she hates seeing herself on screen. “I think the movie was great, but their biggest mistake was me!” She says she can’t help but troll, so she’s stopped seeing her movies entirely! Whatever works! Are you happy with Jennifer’s rise to the top? Would instituting an American monarchy and heading it with Brad and Angelina be the worst thing? I’m all for it!