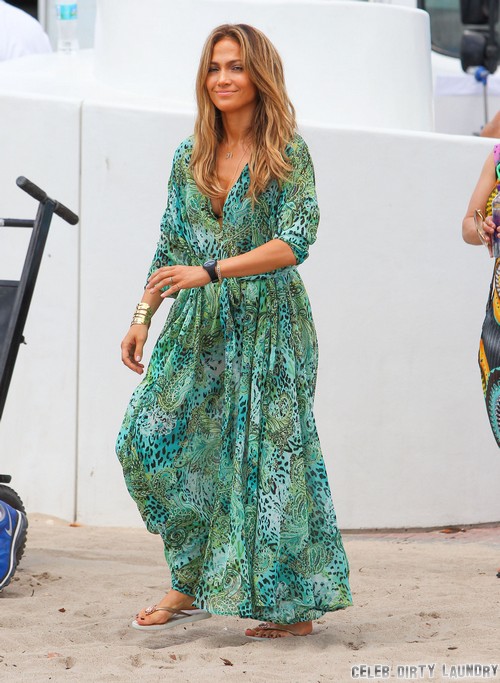 Jennifer Lopez and her boyfriend Casper Smart were rushed away from the set of her new music video on Sunday — after gunshots were fired nearby. J-Lo was filming her new video with Pitbull called “Live It Up” when her security team whisked her and her boytoy to safety.

Of course they’ve gotten whisked away to safety, don’t you know that J-Lo and Casper are worth more than any of her crew members combined?!? That’s sarcasm, people. What she really should’ve done was have her entire crew evacuated. She thinks she’s worth more than her lowly workers? Without those people, she’s nothing.

She was said to be in the middle of an interview with Rob Marciano from Entertainment Tonight when they heard gunfire. He tweeted, “BREAKING: Gunshots fired on Fort Lauderdale Beach DURING my JLo interview. No kidding. Security scrambled her away. Can hear & see ambulances converging ~400 yards down the street. Police confirming: ‘shots fired. no one hit.’ Whew.”

Perhaps she should film in a more secure location? What do you think?

Police detain several people while responding to a call about shots fired at Fort Lauderdale Beach Park, where Jennifer Lopez was filming with her crew Sunday evening on May 5, 2013