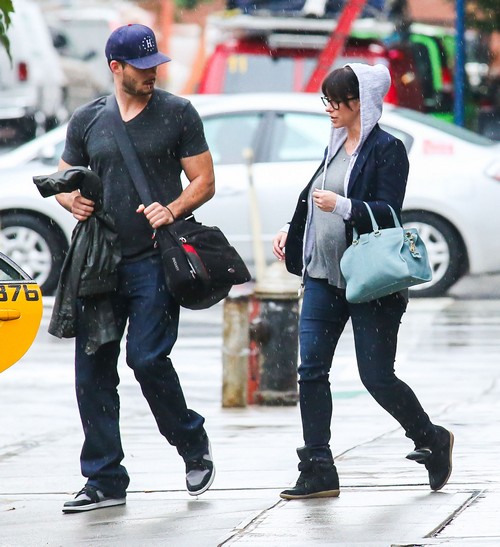 Jennifer Love Hewitt and fiance/co-star Brian Hallisay have reportedly been blissfully engaged for a while now, but new reports claim that Jennifer is furious at Brian for his childish behavior.

Star Magazine reports that Jennifer is on the verge of dumping Brian because of his drinking and belligerent behavior. The couple is expecting their first baby together in December, but they reportedly got into a major fight during dinner at the Palihouse on October 5th in Los Angeles.

An eyewitness explains, “Brian was slurping back beers and being obnoxious. Jennifer was embarrassed. [Brian’s] rowdy night is just one incident in a pattern of immature behavior that has caused Jennifer to rethink the romance.” The source also adds that Jennifer is furious for another reason, explaining, “Jennifer has gone months without a drink, but Brian doesn’t stop.”

Um, if it’s just an ‘eyewitness’ who saw this go down, then how do they know that Jennifer has gone months without a drink? See, Star needs to get their story straight before they publish it. It would have worked better if they explained that another ‘source’ close to Jennifer explained that Brian has a drinking problem, and then put the ‘fight’ down to an eyewitness.

Now, even though their stories don’t generally show it, Star does have some legitimate sources and tipsters. I’m thinking that Jennifer and Brian probably did have a little spat at the Palihouse, but I doubt it was because of Brian’s ‘drinking’ problem. If anything, he might have been drinking because they were having a fight in the first place, and that could be about any number of the numerous things that engaged couples constantly fight about.