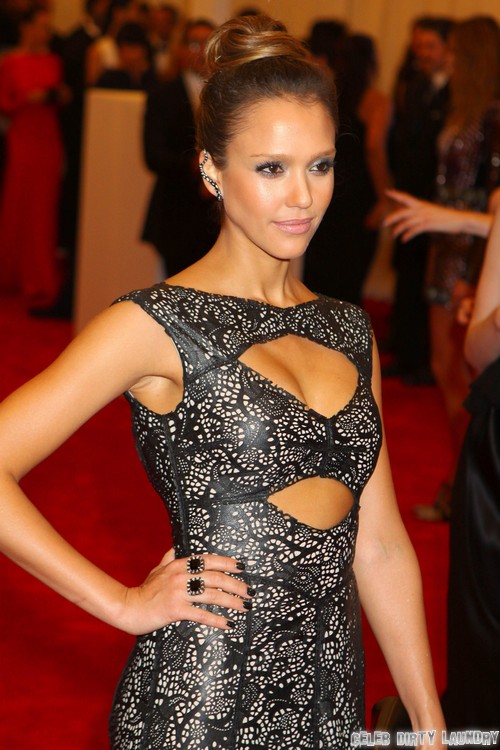 What is with actresses these days and nip slips? First we have Anne Hathaway and the Oscar nipplegate, and now Jessica Alba flashing her boobs after the MET Gala.

Alba’s outfit at the MET Gala was incredibly underwhelming, and it barely seemed like she got the memo about the theme of the soiree being ‘punk’. Of course, like most actresses, Jessica Alba decided to go ‘safe’ with her gown. However, she may not have gone safe enough because she ended up having a wardrobe malfunction later in the day.

Hours after her appearance at the Gala, Alba was reportedly ‘strolling’ around Manhattan when her left breast slipped out from under her tank top, and she ended up revealing her entire left boob to passersby because she was wearing a see-through bra.

Of course, her see-through bra was to prevent bra straps from showing through her MET outfit, but it ended up causing her more embarrassment than it saved her.  Then again, who thinks that their entire boob will pop out when walking in public? It’s not something you can really prepare for, and at least she was wearing a bra. Imagine how much funnier worse the situation would have been if she hadn’t even been wearing a bra.

Despite all that, it’s becoming a common trend to see actresses flash their private parts to the camera, whether intentionally or unintentionally. Even the actresses who claim to be private [cough, Anne Hathaway, cough] resort to measures like this promote a project, and Alba is several tiers below Hathaway – we can only imagine what she’d be willing to resort to.