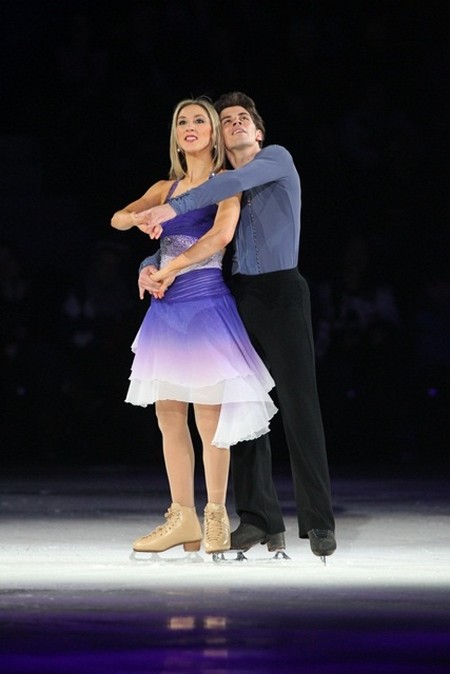 Figure skating is a strange sport. The same required elements pop up in nearly every performance and so if you aren’t totally invested in the sport or the skater,  then it can all look pretty similar.  Thankfully ice dance is the one discipline that is a little bit different and every once in awhile a special duo comes along that makes you stop whatever you are doing because you just have to watch them. The brother and sister team of Sinead and John Kerr are one of those dance duos. They originally hail from Scotland but represented Great Britain for the majority of their competitive career and what a career it has been.

The Kerr’s won 7 British Championships and a fistful of other international medals before retiring to the professional ranks in 2011. They did very well as competitive skaters but it’s as professionals that we’ve really seen them come into their own. The duo has worked extensively with Ice Theare of NY and is now embarking on their second seasoned with Stars On Ice- the biggest skating tour to grace the ice worldwide. You have to be a top notch performer to get invited to share the ice with the likes of Kurt Browning, Dorothy Hamill and Katia Gordeeva.  Sinead and John’s steady, solid performances have ensured that not only do they belong with the traveling show, but that they also have something really special to offer the thousands of fans filling the arena seats.

I caught up with The Kerr’s as they rehearsed in Lake Placid, just two days before the debut of the 2013 Stars On Ice tour. Here’s what they had to say about this fabulous time in their lives.

Celeb Dirty Laundry: I saw that you both had a tricky time getting up to Lake Placid due to the blizzard conditions! Now that you made it, how are rehearsals going?

Sinead Kerr: It was! Our flight was canceled to Montreal from NYC and we really needed to get out that night to star rehearsal so we ended up renting a car. I think we actually beat the snow storm because we didn’t have too hard of a journey up into the mountains. Our rehearsal time has been fantastic. It’s going to be a really unusual show. Some of the routines are more abstract and I think it’s really neat. We have some really different numbers and very modern music. I think there’s definitely going to be something for everyone to enjoy in it this time around. There’s a lot going on and we’re doing some different stuff that hasn’t been done before so I’m really excited.

John Kerr: It has been very intense. We only have 3 days to put the show together this year, so everyone is working like crazy to make it great.  It’s going to be very different from your usual Stars on Ice show. A little more Cirque du Soleil than what Stars on Ice fans are used to seeing. We hope to give the audience a very different experience than what they are used to.

CDL: How many solo spots do you have this year?

SK: We have two numbers and they are completely new numbers that we’ve never done before. We’re excited to do those and then we’re also part of three big staged group numbers that include the whole cast, on top of the two of our own. Are numbers are pretty cool and we’re hoping that everyone will enjoy them.

JK: They couldn’t be more different from each other. One of them is an homage to our homeland and the other is a very introspective piece choreographed by the wonderful Doug Webster, a former choreographer of Stars on Ice and the present artistic director of the Ice Theatre of New York.

CDL: How has crossing over into the professional side of skating changed you both?

SK: We were lucky because during the end of our competitive career we had been doing a lot of shows and we really enjoyed it. We knew that performing was something we’d want to be doing once we stopped competing. This side of skating is what we enjoy doing the most because it has so much more depth. When we came into the professional side of things it made it easier for us to explore ideas. It’s much stricter when you compete in ice dance as far as what you can actually do as far as the rules and such. So this has given us a chance to open up and really try new things and that is more exciting for us now than competing was back then.  As kids in the U.K. We always said it would be amazing to be a part of Stars On Ice but when John and I joined the cast it was almost unreal. Last year when we were the newbies it was a bit weird because we’re with all of these gold medalists but it really does become like your family. We have a bond as we travel around together and then there’s this amazing rehearsal time up in Lake Placid.  It has just made us love every minute of turning professional. As young kids we looked up to skaters like Kurt Browning so to now share the ice with him is amazing and to have the respect of people that we have admired is unreal. I still want to turn around and just ask for his autograph!

JK:  I’m way more relaxed now that I don’t have to worry about all the rules of amateur skating. This has in turn allowed me to be a lot more creative when we put our routines together.  It’s such a thrill. I never in my wildest dreams thought I would get to be in the same cast as Kurt Browning and Dorothy Hamill.

CDL: Who were your mentors looking back that have inspired you to work so hard?

SK: There have been a lot actually. I started off as a singles’ skater so when I was really young I was watching the likes of Brian Boitano and Kurt Browning . Katarina Witt was a big hero to me. On the dance side it was Isabelle and Paul Duchesnay.  I loved them and all of their programs. Of course Torvill and Dean, we grew up knowing all about them and they’re legends in the sport

CDL: What is some of the best advice that has been given to you?

JK: Someone once told me, “You can’t jump! Become an ice dancer.” I thought this advice was mean at the time, but it led me to become an Olympian and I got to tour the world, among other things. I can honestly say this would never have happened for me as a single skater.

SK: That’s a hard one because we’ve been given so much. For us it was always about having respect for each other and to work hard. Also pay attention to the audience because you’re skating for them as well as the judges. That was an important piece. Also we were taught to try and enjoy ourselves even though it’s really hard when you’re so nervous for a competition. It’s true that if you can relax and enjoy your performance, you’ll do better and have a more enjoyable experience. This is supposed to be us having fun and not just work. If you’re doing something that you love then it shouldn’t just feel like work and we really do love performing.

CDL: What comes next for you both after performing?

JK: I love the sport so I’m sure I will stay involved in a coaching/choreography capacity.

SK: I can only see myself involved in skating or sports because it’s what I’ve grown up with. It’s just all I know It would be odd if I suddenly turned to medicine or law or something when I’m more interested in sports.  I’ll always be in skating whether it’s in a coaching capacity or commentating for television. I think my world will always include figure skating. I’ve never particularly cared to be anywhere else.

CDL: What would you like to say to fans that have really supported you over the last decade?

JK: Thank you for supporting me. There is no greater pleasure than entertaining or enthralling people.

SK: Well they have really made our careers to be honest. It’s because we’ve always been seen as crowd pleasers that we get to skate where we are now. It’s because of that connection  that we skate and we feed off of it. You have to be present and in the moment with the audience in order to react off of it. You have to do that to really pull off a good professional performance  and it bonds you with the audience. Without that support we wouldn’t have the career that we do and we really understand that. It’s why we always take time for autographs or photos or whatever. Without the fans we wouldn’t be doing what we love.

The Stars On Ice tour is embarking on it’s Japanese leg but will return to the states in March for a handful of shows. If you can’t catch it live check out your local television listings because a one-hour syndicated special will air later this winter!