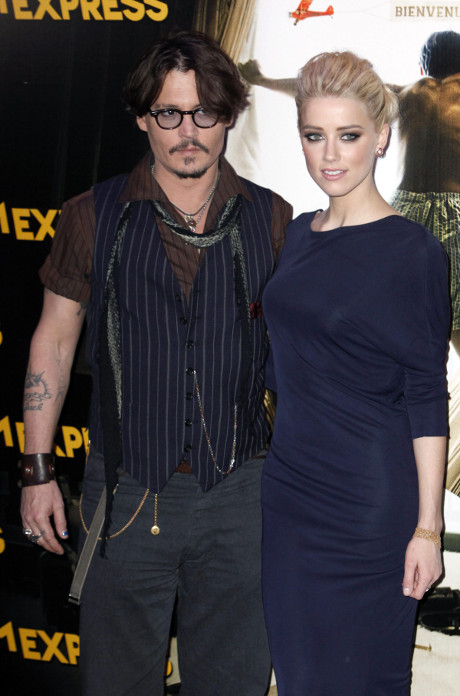 Johnny Depp was spotted in Tokyo recently — to promote The Lone Ranger — and he wasn’t alone. His entourage included his children and a woman who definitely wasn’t Vanessa Paradis (Johnny’s ex), but rather Depp’s new love interest Amber Heard. This little outing shared between the on-again-off-again couple marks the first time Amber’s been seen with Depp’s children since they began “dating” nearly a year ago. She was seen getting rather chummy with Lily-Rose, 14, and Jack, 11, and we have a little hunch that Vanessa Paradis isn’t so keen on this situation.

Amber was seen alongside Depp on numerous instances while he was on tour promoting his latest blockbuster, The Lone Ranger, and they both appeared quite fashionable. But how has this relationship, which has gained more momentum over the past months, influenced the relationship he shares with the mother of his children?

When Depp and Vanessa called off their nearly 14-year relationship, they agreed to keep things on amicable terms, but we’re interested to see how long that will last now that Amber appears to be wiggling her way into a “step mother ish” type of role.

“The last couple years have been a bit bumpy,” Depp said in a Rolling Stone magazine interview last month. “At times, certainly unpleasant, but that’s the nature of breakups, I guess, especially when there are kiddies involved.”

“So for whatever reason that ­ceases, it doesn’t stop the fact that you care for that person, and they’re the mother of your kids, and you’ll always know each other, and you’re always gonna be in each other’s lives because of those kids. You might as well make the best of it.”

What do you think about Amber getting super close with Depp’s children? So far Vanessa hasn’t spoken out about the situation, but there’s no getting around the fact that she definitely harbors feelings about these developing circumstances.