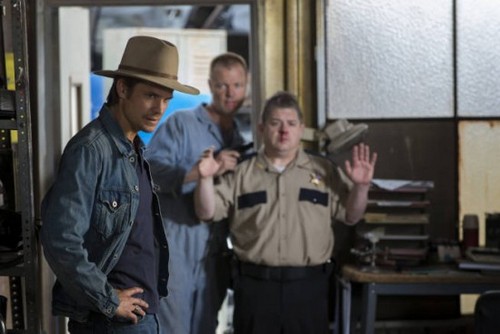 Tonight on FX JUSTIFIED returns for it’s fourth season.  Tonight’s season premiere is called “Hole In The Wall.”  If you have never watched the show before it is based on the works of crime novelist Elmore Leonard, including Leonard’s short story “Fire in the Hole.”

In Season 3, Deputy US Marshal Raylan Givens (Timothy Olyphant) faced off against dirty politics, hidden fortunes, a mysterious criminal ringleader named Limehouse, and Quarles, an ambitious gangster from the underbelly of Motor City. This January, Raylan will start to pick at the thread of a cold case over 30 years in the making, unraveling a riddle that echoes all the way back to his boyhood and his criminal father’s bad dealings. Meanwhile Boyd Crowder (Walton Goggins) finds his grip on Harlan loosening due to a Pentecostal preacher with a penchant for theatrics and a knack for manipulation to rival his own.

On this season U.S. Marshal Raylan will have new crimes to solve and on tonight’s premiere episode, while running down a vicious fugitive, Raylan finds evidence his family is at the center of a legendary unsolved mystery.

Tonight’s season premiere looks like it is going to be great and you won’t want to miss it, so be sure to tune in for our live coverage of FX’s  Justified at 10:00 PM EST! While you wait for our recap hit the comments and let us know how excited you are about the new season of Justified premiering tonight?

Flashback to 1983, someone parachutes down onto a suburban street. Their head is splattered open and there’s busted packets of drugs all around the body.

Present day, Raylan wakes from dozing off at the office. A Knoxville bail bonds woman calls up – there’s a brief flashback to them hooking up a few years ago. She tells him it’s not a personal call – she needs a hand up in his Kentucky district. She has a skip with an ex-wife in Lexington. She wants him to find the guy so she can call Lexington PD. She offers him three grand to help. Raylan tells her to send the address. He leaves the office in Rachel’s hands and takes off.

A guy knocks on a woman’s door carrying a bag of takeout. She refuses to let him in and he takes off. Raylan watches – it’s the bail skip the bondsman is looking for. He drops his bag of fast food right by Raylan’s car. The guy gets into his car and Raylan knocks, holding up the bag of food. He pulls a gun on the guy who tells him he’s got a gun pointing at Raylan through the door. Mexican stand off…

He mocks Raylan and says you won’t shoot me. Raylan shoots the airbag and it blows up in the guy’s face knocking him out. Raylan yanks him out of the car and cuffs him. He calls the bonds lady and tells her he’ll bring the guy in. Awesome! I have never seen anyone shoot an airbag on any TV show or movie. That rocked.

Boyd checks his pocket watch and asks Hiram about being “saved” and Hiram tells him about the new preacher – Last Chance Holiness – run by Preacher Billy. Hiram tells him the preacher’s been healing people and that’s why Boyd’s oxy sales have been down. Boyd wants to know when Hiram was saved and he said last week. Boyd said he gave him a shipment of oxy three weeks ago and he owes him. Hiram tells him he didn’t sell the oxy and flushed the evil drug down the toilet.

Boyd quotes him some scripture that Hiram doesn’t like. Boyd steps away from the window as a firebomb explodes outside. Boyd tells him if he doesn’t have his money by tomorrow night or the next firework is coming for him.

A couple of teenagers have broken into a house and are robbing the place. Constable Bob (a new character played by the ever cuddly Patton Oswalt) tells the kids to stop that he’s got attack dogs. They run off and he heads to check out the house they were burgling.

In Raylan’s car, the bail skip is trying to figure out who he is. He mentions bounty hunters aren’t allowed in Kentucky and wonders if he’s federal. Raylan says if he doesn’t shut up, he’s going to put him in the trunk. He tells Raylan that he just came to see his kid, but his ex wouldn’t let him in. Raylan asked if he has visitation and he says it’s supervised because he doesn’t have a decent place to live.

Constable Bob calls Raylan and tells him he’s at Arlo’s house. Raylan said he’s headed that way and it will stop by. The skip complains and Raylan slams on the breaks knocking the guy into the dash. He locks the skip in the trunk.

Hooker Ellen May gets a visit from a john who brings her drugs to snort wrapped up in fake money handed out by Preacher Billy’s church. They get high and he tells her he’s got another surprise. He comes back inside in a bear suit and she shoots him several times. Damn!

At Arlo’s house, Rayland and Bob come in and check out the house. They see that the kids had knocked holes in the wall to strip the wires. Bob says if he catches the guy who did it, he’s going to open up a Costco sized can of whip ass on them.

Raylan sees something in the wall and bashes it open more. He finds a canvas bag with a driver’s license for Waldo truth. Bob says he know he’s a joke because he’s a constable and he only gets paid $2,400 a year and that he had to provide his own car and even bought the lights for the top of it.

Bob tells Raylan that if shit ever gets serious to call him – he’ll grab his go bag and be there. He tells Raylan to stay frosty. Raylan opens the trunk and tells the skip he’s got one more errand to run and if he’ll shut up, he’ll let him ride up front after that.
The kids who robbed the house are watching Raylan through binoculars. Hmm.

Ava tells her to quit griping about it – that she killed a man for her – and she needs to quit fussing about her punching her once. Ellen May tells her she gets really scared and feels really low. Ava tells her to get off the meth and the coke and she’ll feel better. Ava wants to know what Arlo gave her and she says she doesn’t know, but it wasn’t oxy.

Ava sees the piece of money from the Last Chance Church and asks about it – Ellen May tells her it came with the drugs. Ava tells her she can’t have a gun at work anymore and Ellen May apologizes.

At the hardware store, Mike the proprietor asks Raylan how his daddy’s doing and he says he’s in prison. The girl from the robbery is in the store and knocks over a box of screws – she’s stalling Raylan for some reason – maybe they think the canvas bag had money in it. She gets in front of Raylan and physically blocks him. She lifts her shirt and asks Raylan what he thinks of her boobs. She says she didn’t get them until last year and he says patience is a virtue.

She runs out the back door even though Mike told her not to. Raylan comes back in and asks where the girl went – Mike tells him she went out the back and he tells him his car is gone. Oh snap and he’s still got the guy in the trunk!

Boyd, Ava and Johnny are talking about their oxy issues. He tells Johnny to get the sitch under control because he’s tired of losing money. Johnny takes off. Boyd wants to know how she handled Ellen May. She said she told her to wait until daddy got home. Boyd tells her nobody ever told him running a criminal enterprise would be this hard. Ava pats him on the back and says they forgot to mention it on career day.

At the bar, Johnny’s playing pool and some shady guys come in asking for Boyd Crowder. They say they’re from Bel Air Maryland, the birthplace of John Wilkes Booth. He wants to know why they’re there and they say Bowd Crowder. Johnny says he doesn’t know him. The new guy says you can watch the eyes to see who’s lying.

Johnny tells the guy to take off. He tosses Johnny his bottle of beer and when he grabs it, he kicks Johnny’s cane out from under him. He heads into the back and Ava screams for Boyd, but it’s too late – he’s bear hugging the stranger – Colton – an old pal from Desert Storm, a former MP who had locked Boyd up tons of times.