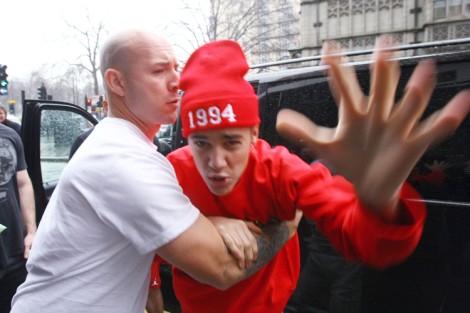 Despite what his dwindling fan group says, Justin Bieber is approaching rock bottom too fast and too hot. According to TMZ, one of his tour buses was found to be carrying “both marijuana and drug paraphernalia”. However, some will be glad to hear, no arrests have been made.

It seems you can carry certain illegal drugs in certain quantities across the Canadian Border with only having to deal with a fine. I didn’t know that and for the officials I hope they remember this particular policy when others idiots decide to follow. Why you ask? Because its one thing for them to let drug carriers go and its a whole other situation if people were to find out that only celebrities can carry drugs without penalty.

It’s something we call elitist and that’s what the border has become. Did you know that Rihanna’s tour bus was pulled over for the very same thing back in March. Admittedly both of the stars weren’t on the actually bus but its still their people that have been smuggling drugs into Canada and Detroit. Way to go by the way. As if Detroit didn’t have enough bad news. Now it has a druggie bridge.

I’m sorry but I gave up on Rihanna a long time ago and think people should prepare to do the same with Justin. He became too rich when he was too young and his parents merely want to be his friends. There is no helping him. His name and those he’s allowed to use his name are sinking. So I’m sorry to the hangers-on. You know who you are.  It’s time to abandon the titanic.