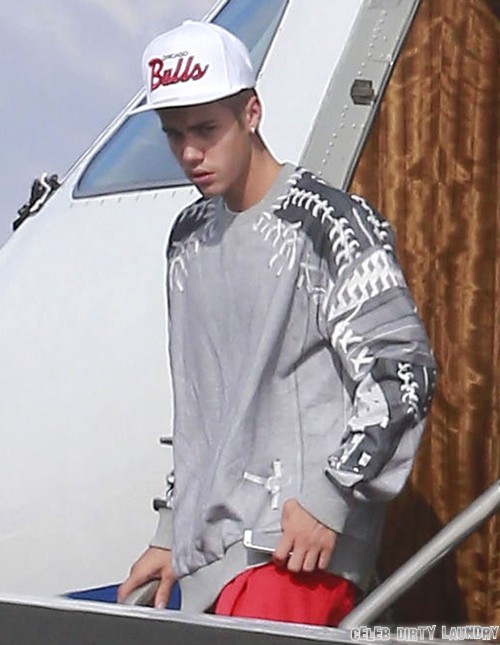 Poor wittle Justin Bieber. After getting into a fight at a bar when he left his wimpy VIP section and entered the real world for an instant, Justin was spotted getting off a private plane with his crew, and he looked really, really upset.

Now, what could Justin be upset about? I assume any number of things, but he definitely looks like he’s jonesing for something, doesn’t he? After partying and partying non-stop, it must be hard to get on a flight and stay without smoking for a couple of hours. Of course, it’s a private jet so Justin has infinitely more conveniences than most people flying, but that doesn’t change the fact that when you’re flying, you are generally not allowed to smoke pot.

Of course, Justin could have also been upset about the reports on his bar fight. Well, I should say the bar ‘fight’ where he nearly got his ass kicked. The pictures from that fight are quite entertaining, largely because Justin first looks terrified when his assailant comes at him, but after he’s being held back by his bodyguards, Justin starts kicking the shit out of him. Justin must be the most repulsive cowardly bullying wimp on the celeb scene.  At least Alec Baldwin actually fights his own paps!

Obviously, Justin’s not upset about the actual fight itself, but he may be upset that people managed to capture pictures and release them online. At this point, I don’t know why he thinks he can continue fighting people in bars and clubs and keep it secret. In today’s day and age, EVERYBODY has camera phones and if they can make a quick buck selling pictures of Justin Bieber in a fight, why wouldn’t they? Even better, wouldn’t it be great if Bieber, the wannabe, got into a fight without his bodyguards there?

Justin Bieber and his crew arriving on a private jet at an airport in Burbank, California on September 2