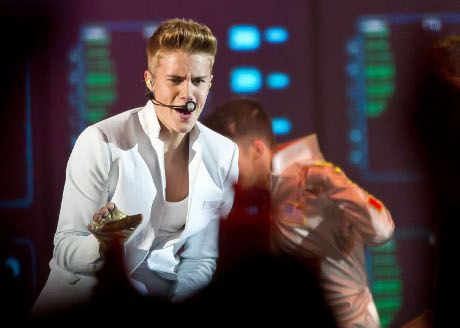 Justin Bieber got a trim and dye job recently, and his new look just might be a last-ditch effort to try and win Selena Gomez back as well as shed the new “bad boy” image he’s garnered for himself over the past few months. Now, I’m not sure how a new haircut can win back a girl and change the world’s perceptions of you, but the Celeb World has different ideas of how the universe works — and a new hairstyle just might be what Bieber needs to turn his lil’ Bieber life around.

I personally think he’s having an extremely tough time with his recent breakup with Selena Gomez, and I wouldn’t put anything past him in his efforts to try and win her back. (But he supposedly has a new girlfriend. So, there’s that.)

Justin is currently in Manchester, England and Selena is touring around Europe for her Spring Breaker’s press work. Wonder if Justin’s new cut and color managed to put a sparkle in her eyes? Don’t get your hopes up, Bieber. Selena Gomez hasn’t shied away from the sexy outfits or fun while on the tour, and it seems as if Justin is the last thing on her mind right now. She’s done with you, dude.

But even though he might be having a hard time with this break up, his fans would be hard pressed to notice it! He’s currently on tour and recently performed in Dublin, and recently he blew the roof off a stadium in Manchester. He also managed to check out a Justin Timberlake concert and get a haircut. He kept the same style, this weird faux-hawk situation reminiscent of Elvis, but chose to shave a bit off the sides for a fresher look.

He went a bit lighter as well — a change from the dark brown color he had been sporting previously. Perhaps this color is an attempt by his managers to lighten up the dark persona he’s unintentionally crafted from himself over the course of the past couple months. With all his partying, including smoking, I can see how his managerial team might be trying to do some damage control.

What do you think of Justin Bieber’s new look? Think that shiny new do is enough to lead Selena back into his arms? Check out the gallery we have below of Justin at one of his concerts [P.S. I CANNOT even handle the one of him with those ridiculously large angel wings (the one where he’s drastically shrouded in shadow) *sigh* *palm to face*]