Justin Theroux GQ Interview Reveals he tried to Give Jennifer Aniston his STDs — She Said No Thanks! 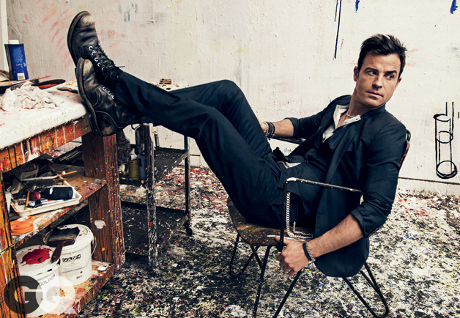 Justin Theroux revealed in an interview with GQ that he tried to give Jennifer Aniston STDs. Calm down, now. Not STDs in the traditional sense, but his ‘Syphilis throats’.

What are syphilis throats, you ask? Well, they’re collectibles that Justin keeps lying around, and as he explains, “My wagon-wheel table is my syphilis throats. I have these beautiful wax-museum pieces—handmade, from the 1800s—from a museum of curiosities. They’re just these open mouths, with tongues, and in the throats are different stages, labeled, of syphilis and gonorrhea and whatever. Those definitely found a great place in my office in L.A. They weren’t going to be above the fireplace anytime soon.”

Clearly, Jennifer was not happy with Justin’s taste in furnishings, but I’m sure she’ll get over it. Meanwhile, the two are in the midst of completing the their Los Angeles mansion, and will move in fairly soon.

The interesting thing — even though the GQ interview with Justin starts out mentioning his career and his extensive credentials and even adds that nobody should be calling him ‘Mr. Jennifer Aniston’ — they then spend an inordinate amount of time discussing Justin’s relationship with Jennifer. So why remind everyone when you specifically mention that Justin’s image is not tied to Jennifer? Well, because it’s a magazine and they need to sell their issues — and anything involving Jennifer’s name will sell a lot more than it would otherwise.

Anyway, Jennifer and Justin seem to be in a steady place right now, even though their relationship was plagued with breakup rumors a couple of months ago. Jennifer just came off a huge hit with We’re The Millers, while Justin is preparing for his HBO show.

What do you guys think about Justin’s interview? Let us know your thoughts in the comments.