Kanye West Hates Kim Kardashian For Calling Photographers, Takes His Anger Out On the Paparazzi (VIDEO) 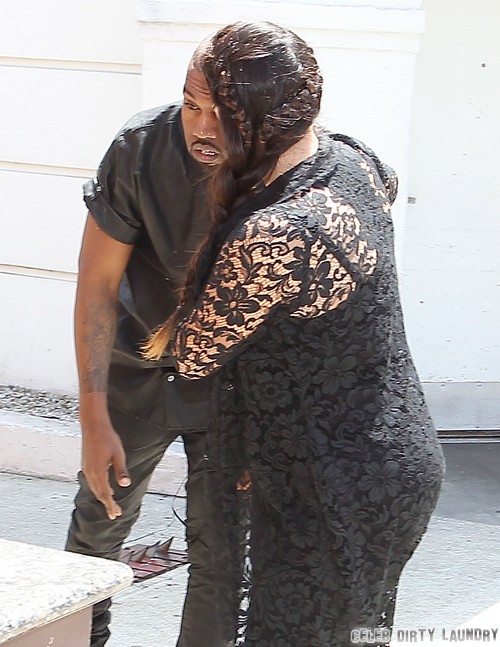 Kanye West is grumpy, grumpy, grumpy. I don’t blame him, but I wonder why he hasn’t been sent to media training? I guess even if he has, being with Kim Kardashian and the amount of paparazzi attention that comes along will do that to a guy.

Not even a month’s passed by since Kanye headbutted a pole, but he clearly still remembers the scar it left. When the paparazzi were following him today (video here) one was nice enough to wish Kanye a happy belated birthday. Kanye’s response? “SHUT UP! DON’T EVER TALK!”

Before that, when the paparazzi was simply asking how he was, Kanye flew off the handle, shouting, “DON’T ASK ME QUESTIONS, MAN!” Ok, then. Don’t talk to Kanye on the street. Note taken.

In all seriousness though, this is ridiculous. It’s not like the paparazzi were swarming him or even coming close to him. They kept a respectful distance, didn’t bring up Kim’s name, and actually wished him a happy birthday. In the land of paparazzi encounters, that’s like the holy grail.

Of course, Kanye’s been extra grumpy lately because of all the attention he’s been getting. I mean, he really should have known that was what he was signing up for when he decided to go out with Kim Kardashian and then get her pregnant. Maybe he did, but I doubt he was expecting the level of fame-whorism that existed in the Kardashian family, especially with how much they call the paps themselves.

So what’s he to do? Well, he can’t exactly blow up at Kim or her family, can he? Not while she’s carrying his child. Everyone already thinks he’s a useless father, and the baby hasn’t even been born yet. So instead Kanye bottles his anger and displaces it, taking it out on the paparazzi instead. Again, it’s not like they don’t deserve it. Just not this time.