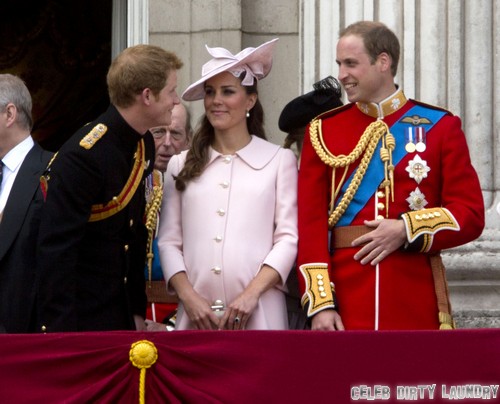 The anticipation is growing and the excitement is in the air for the birth of the royal baby. Kate Middleton’s due date is getting nearer, which means her public appearances are drawing to a close for now and the preparations for the upcoming birth of her and Prince William’s baby are at full throttle.

She is due in mid-July and you can be sure it’ll be the biggest news of the month, with celebrations to follow. Get ready for the royal invasion on our TV’s again! This baby will be the most talked about baby in ages. Also, it’ll be fun to see what the baby will be wearing once born!

The Duchess of Cambridge made her final appearance with her husband, Prince Harry, Queen Elizabeth, and the rest of their family at the Trooping of the Colors parade celebrating the Queen’s 87th birthday. Thousands of people also joined in on the celebration. The only person who was sadly missing was Prince Philip who is currently in the hospital, after having undergone exploratory abdominal surgery and was not able to be by their side.

Is it July yet? Also, an important question that is forever going to be in the minds of millions of women, is Prince Harry still available – and how do we get in touch?

The Royal Family attends the annual Trooping the Colour Ceremony at Buckingham Palace on June 15, 2013 in London, England