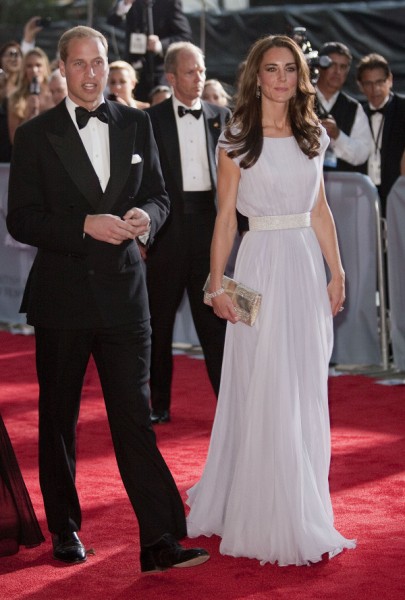 Oh no she didn’t! Did Kate Middleton just compare her sister to the trashiest of the trashy? Kinda, sorta?

Kate Middleton’s fashion is being called up for debate again as well as the quick to label, “Kate effect”. Kate Middleton apparently has the golden touch and whatever she wears sells out in minutes. But the numbers might be padded, the Daily Telegraph reports. It turns out most of her outfits are so hard to find because she likes to wear last year’s fashions. Tres boring for us fashion lovers. Most of already knew that so it’s really not fun news. What is fun is that she gets compared to other style “icons”, Pippa Middleton and Kim Kardashian in the process. It seems Kate is uber concerned not to dress provocatively like her sister and goes to extra lengths to alter her dresses so there are no comparisons.

“She’s highly attuned to those details that will provoke a tabloid frenzy and above all, she does not want a tabloid frenzy,” designer, Roland Mouret said, adding she requested one of his dresses be cut looser than the sample last year. “She doesn’t seem to feel the need to dress sexily to woo the world. She’s dressing for William and herself. She doesn’t want a bottom situation like Pippa had.”

Awesome… although I don’t think Pippa had a situation. She just wore the shit out of a dress.

Mouret went on to flap his gums even more by saying that most woman who appreciate Kate’s style aren’t going to buy her clothes and try to look like her. “The kind of people who like Kate’s style are not the kind to rush out and copy her dress,” he told the February edition of Vogue. “You don’t see hundreds of women running around looking like her. To be honest, we’re more likely to get orders on a dress that Kim Kardashian’s worn.”

Dear God, what does that mean? Is Kim Kardashian truly more of a fashion icon than the DoC? Say it ain’t so. I doubt it. I would never wear a Kate dress because everyone will have seen it a hundred times online and will know it’s a Kate dress. Kim Kardashian doesn’t have that problem. Yes, she’s photographed but her dresses never really shine on her because her waxy face and tits and ass take center stage. Who ever remembers what Kim Kardashian wears?

Still, this is a pretty good article. You don’t get many designers kissing and telling with Kate. I wonder if Mouret will get slapped on the wrist for this. Let’s see if she wears any of his dresses next year!