Kate Middleton Portrait ‘Plain’ And ‘Rotten’ – Do You Agree? (Photo) 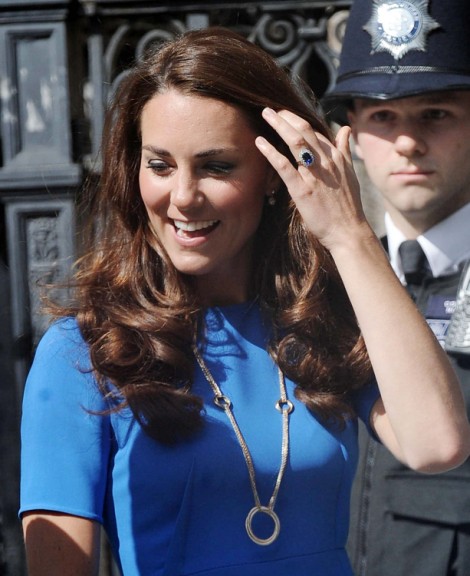 Is this a joke? Dear God it has to be because this is the fugliest thing I’ve seen in a long time. I’ll give you that I was no art major. I’ll give you that perhaps I don’t peruse art galleries on rainy Sunday afternoons as much as I should. But if you tell me Kate Middleton’s portrait is pleasing to the eye then we just can’t be friends.

Kate and Prince William stopped by London’s National Portrait Gallery this morning to check out Kate’s official royal portrait. Paul Emsley is the artist behind it and he said he wanted to capture the DoC’s “charm, serenity and intelligence” as well as her “sparkling green eyes”. I’d say he missed the mark. And I’m not the only one. Though some are trying to be polite, the backlash has been snarky as all hell. Some art critics have called the painting “plain” and “rotten” and are saying the the picture fails to capture Kate’s sparkle as well as her photogenic nature. Say what you want about her crazy smiles, but the girl can take a pretty picture.

Among hating the whole thing, I particularly hate the face. She comes across as a 60-year-old haughty aristocrat. The Kate Middleton PR machine does its damnedest to play the “Kate’s normal! She’s just like you and me!” card constantly and nothing about this picture reinforces that. She just looks so hard, so entitled and that is not the Cambridges’ message. Now, if the artist told me this portrait captures Kate’s inner resolve; her rise to the top; the game she played to outwit every other girl in the world and snag a prince after ten years then I’d say job well done. There’s a ruthlessness in the eyes, a smirk of knowing that she got her prize in the end that I can appreciate. But, again, that can’t be what Kate wanted to convey. If I were William, I’d stick to flowers next year.

The best part of this whole thing? Pippa Middleton’s face! It says it all. Scroll down the DM page and you’ll see it. She’s literally like WTF. It’s priceless.

What do you think of the Kate Middleton portrait? Are we being too harsh or do you want to shake the artist and scream “What the hell were you thinking?”