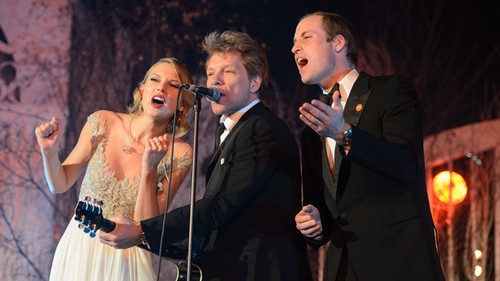 Prince William let his hair down, metaphorically speaking, during the charity Winter White’s Gala at Kensington Palace. Jon Bon Jovi and Taylor Swift were two of the highest-profile musical guests at the event, and when they decided to sing ‘Livin On A Prayer’, who would have thought that William would join them on-stage and sing the chorus with them? It’s not a side of the Prince that we usually see in public. And where was Kate Middleton, changing diapers?

It all started when Bon Jovi started saying, “Just maybe, the karaoke kid could come up and sing along …You don’t have to do it your Majesty, I understand, I can’t fly helicopters or ride motorcycles like you do. That’s cool, that’s cool. A couple of words…” Taylor Swift and William both joined Bon Jovi on stage, where William sang the chorus along with the two musicians and even stayed on stage for another round.

It was definitely a surprising and entertaining moment for everyone present, and you can bet that it was captured by practically every camera phone in the vicinity. Of course, no other performance came close to Bon Jovi’s last night for this very reason. Taylor did put up a good show as well when she sang ‘Trouble and Fifteen’, and later thanked William for inviting her, explaining, “It is my first time playing at Kensington Palace or any other palace for that matter. I have to thank you, Prince William, for having me. It’s amazing. To call attention to this age group especially, teens and young adults.”

Well, she’s clearly aware of her fan base, so good on her for knowing her demographic. And it’s great that Will was willing to make a fool of himself for laughs, and it definitely brings more attention to the event and the charity itself. Again, William’s not a stranger to doing charity, but I don’t think he’s ever brought attention to any particular charity by singing on stage. There’s a first time for everything.