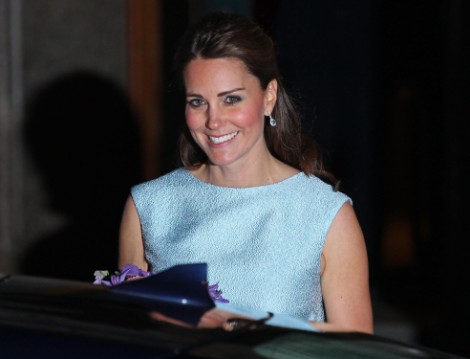 Kate Middleton’s been working her little baby bump so hard lately we almost forgot that just a few months ago her boobs and her biscuit were just about anyone wanted to talk about. What?! No! Kate Middleton’s pregnant! She’d never walk around topless (and bottomless) outdoors at a French chateaux. It’s almost been whitewashed by all this baby talk but it happened and it was glorious. I miss those days. I don’t mind the bump but I’ll take a royal naked scandal over a royal baby bump story any day.

So why are we talking about this again? Because Prince William finally triumphed and got his way! The chief executive of Mondadori, which owns Closer magazine, Ernesto Mauri and photographer, Valerie Suau, have both been charged with invasion of privacy. Suau took the photos that were published by La Provence although they just involved Kate in a bikini. The photographer who took the naked Kate Middleton money shots has still not been identified. The investigation is ongoing.

I have no idea what any of this means in the long run. Will these people just get a slap on the wrist to be made an example of or will the punishment be harsher? William was out for blood for awhile but I wonder if he’s calmed down. I know he’s trying to make a point but I still believe he needs to take some responsibility for his, and his guards’ incompetence. It will be interesting to see what happens when the real offending photographer is found. That’s the dude the royal couple was really after anyway.

So, after all this time, do we still feel OK with this? Does William still have a good reason to move forward with the lawsuit or should he just drop it and move on? You’ve gotta hand it to him – his anger had follow through.

Do you believe the real Kate Middleton topless photographer will ever be identified and sued or will William and Kate have to settle their vengeance with these secondary offenders?