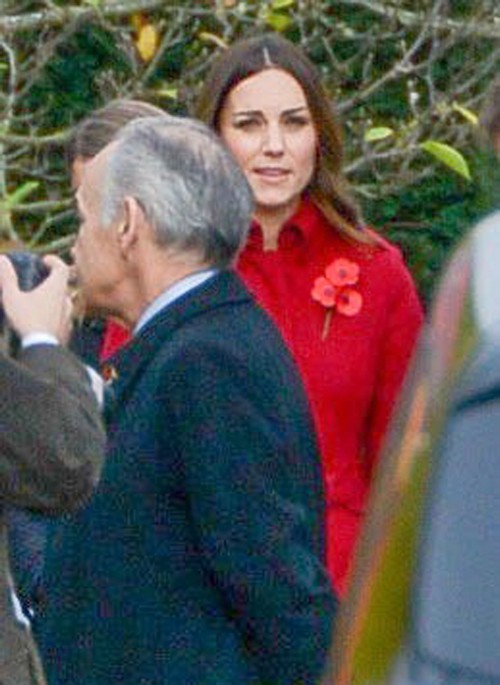 Over the last two years Kate Middleton has really come into her own as a royal and seems to have nearly perfected the fine art of appropriateness so when she makes a misstep, well it’s that much more obvious. Unfortunately the future Queen of England was captured twirling her long hair and looking more than a little “off” at what was in fact a somber veteran’s ceremony. Granted, the unfortunate photos may not have caught Kate actually being disrespectful, it could have simply been a wind gust that momentarily caused her to break from the expected stoic demeanor.

Whatever the reason I’m pretty sure that Kate will be hearing about it from Queen Elizabeth because like it or not, she needs to be respectable and respectful at all times during an official appearance. Here’s the thing though, there have been serious rumors circulating about Kate having postpartum depression and if that’s true then by now she would no doubt be under a doctor’s care and likely on an antidepressant. If that’s the case then Kate may not be able to keep herself looking somber even if her life depends upon it.

A strong antidepressant would make Kate feels like everything is just fine and honestly, it could explain the kind of dreamy, dazed look in her eyes in these photos. She could be on meds for just a few short months to help her bounce back from the havoc that her hormones are putting her body through. Do you think that Kate was in la-la-land at this serious event or was this photo captured at simply the most unfortunate moment possible? Tell us your thoughts in the comments below!