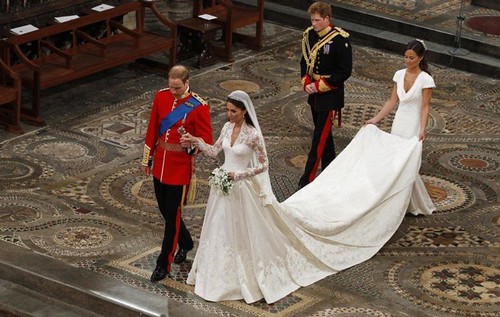 Kate Middleton and Prince William welcomed a baby boy on Monday afternoon, and the Internet was ablaze with celebrity well-wishers eager to send their congratulations to the new parents.

Ellen Degeneres hilariously wrote, “It’s a boy! So happy for my cousin Kate and the future King of England!” Bethenny Franklel wrote, “Congratulations to the Royal Family on their new baby boy!”

Josh Groban wrote, “I know it’s a boy, I’m watching it on the dang web cam. It’s gurgling.” Kelly Ripa wrote, “It’s a boy! Perhaps Anderson? Or Cooper?” Joel McHale couldn’t have said it better when he wrote, “A lady had a baby.” Truer facts were never spoken.

David Cameron of course tweeted about the occasion as well, saying, “I’m delighted for the Duke and Duchess now their son has been born. The whole country will celebrate. They’ll make wonderful parents.” Well, he’s obligated to see that, but hopefully it will turn out to be true.

There were some more humorous tweets from several celebrities, such as Ellen Page’s, “Woah people seem super excited for this new British band, the Royal Baby.” Christine Teigen wrote, “Poor Harry. A tiny baby has more power than him. Unacceptable.” Rashida Jones also added, “Today may be a good day to announce my new EDM DJ Name: Royal Baby Labour.”

It’s certainly true that most people seem very excited about the royal baby, but then again, it’s understandable. This baby will go on to become the future King of England, one of the oldest and most powerful monarchies in the world. Right now, he’s just a tiny baby blissfully unaware of the expectations and pressures surrounding his future, but alas, he’ll have to grow up far too quickly.

Are you guys excited about the birth of the Royal Baby? Let us know your thoughts in the comments.