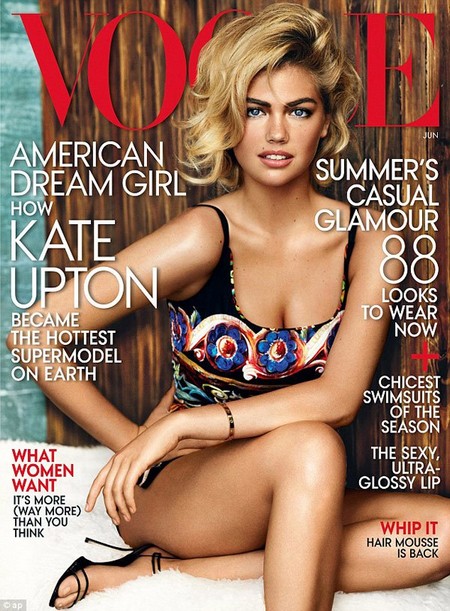 You know, for a country that averages Size 12 for women, the criticism against Kate Upton has been disgusting and sometimes vitriolic in nature. We should be celebrating the fact that a women who actually has curves and body fat is being put on the cover of magazines, instead of their usual brand of starved and bony ‘models’.

Victoria’s Secret has dismissed her as being ‘too obvious’, and others have descended to calling her ‘fat’ and ‘unsightly’. However, Kate’s not letting getting the criticism get to her.

In a new issue of US Vogue – which in itself is shocking that Anna Wintour, a notorious sizeist, allowed Kate on the cover – Kate discusses her body and says that she loves it, despite the criticism and hatred targeted towards her.

Kate’s been taking the modeling world by storm the past couple of years, and she has managed to land prestigious contracts and covers since her debut on the Sports Illustrated cover two years ago. Now that she’s finally covered US Vogue, which is considered the most prestigious of them all, there’s no stopping Kate Upton. The simple fact of the matter is that despite whatever criticism she gets from the vocal minority, the majority of people in this country like seeing a girl with curves. Or as some idiots are saying, a ‘chubby’ girl with curves.