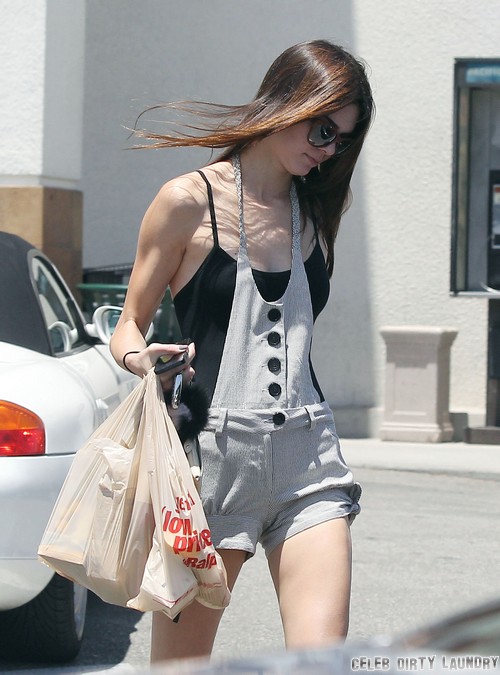 Viewers of Keeping Up With the Kardashians have watched Kendall Jenner grow up. She was in grade school when the show first premiered on E! in 2007. Kendall and her little sister Kylie Jenner (dad is Bruce Jenner, their mom’s second husband) were featured little on the Kardshaian/Jenner reality show. Now Kendall is 17 years old and featured a little more prominently. She also joined the family business. Kendall is a model and managed by her mom Kris Jenner. One of her first jobs was for Forever 21 (which was mentioned on the show).

Kendall is still much more grounded than her older step-sisters Kourtney, Kim and Khloe Kardashian but she is still her mother’s daughter. Kendall is delusional and lives in her own world. She gave an interview with The New York Times and told the paper “I don’t want to be a big part of the show. Neither does my little sister [Kylie], only because we want for a little while to keep our somewhat normal lives.” If Kendall’s life is normal I’m the Queen of England.

Giraffe Legs grew up in a lavish mansion being spoiled by her parents. The show chronicled her developing bratty, entitled behavior. Later Kendall’s work and school life became her story line. She got her way when she pressured her mother to consent to home schooling – which means no schooling. Kendall argued her school work got in the way of her modeling jobs, so she needed to do it on her own schedule.

The Amazon did a sweet, teenaged girl photo shoot for Seventeen Magazine, but she is building her portfolio as a skank. Kendall’s recent campaigns have her posing in clothing that is too old for a teenager to wear and posing provocatively in skimpy bikinis. I’m sure this was all her momager’s idea but the fact that Kendall went along with it speaks volumes about her character. She saw Kim make buckets of money posing nude several times, posing in lingerie and in tight fitting outfits that often show skin – not to mention the sex tape. Of course Kendall wanted a piece of that action! She has to exploit her body while she is still young and in demand. After all, the shelf life of a model can be fairly short. 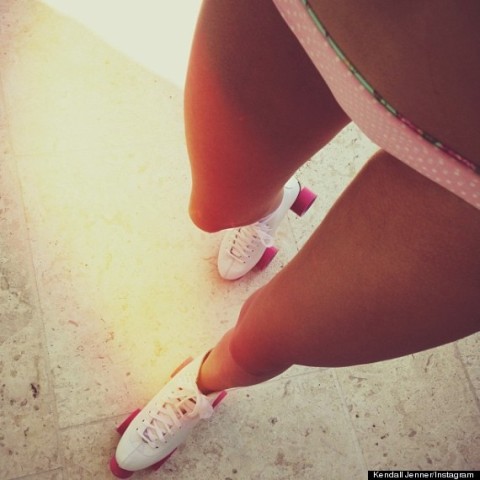 Kris’ doppelganger (before all her plastic surgery) told The New York Times she doesn’t care about the controversy and rumors regarding her family. She said “I don’t feel anything about it. It doesn’t hurt me. It’s not something that gets to me.” Of course it doesn’t bother her! Kendall is self absorbed and doesn’t care about anyone’s feelings but her own. Being the Dictator of Calabasas’ daughter the insensitivity comes naturally. Giraffe Legs picked up this awful behavior from the idiot women she calls family. It was reported that Kendall and Kylie left the Kardashian sisters’ fashion show because they hated the clothes. This sounds like something Kim would do.

I had hope that Kendall would be the opposite of the sisters Kardashian. So far she is following their lead. Even her Facebook entries are self absorbed. It’s full of selfies and pictures from her jobs. She is starting down the path of becoming a joke like the rest of her family (including her dad and step-brother Rob Kardashian).

Kendall is still very young and may come around. If Kendall decides to grow a back bone and stand up to her momager she will have a chance at a long career doing reputable work. Giraffe Legs will also have a chance at a healthy relationship with a man. The K girls are all with cruel men who humiliate them. Her dad isn’t much better.

Although Bruce has been a good father to Kendall deep down he is no better than his step kids and his evil wife. His son from a previous marriage is publicly claiming Bruce was never there for him. Also, there were reports that Bruce has bombshells to drop in court that would crush Kris if they got divorced. Kendall may have a disadvantage due to her genetics but she can still rise above it if she truly wants to.  Of course she doesn’t though – since she confuses the Kardashian/Jenner axis of evil with the American pantheon.