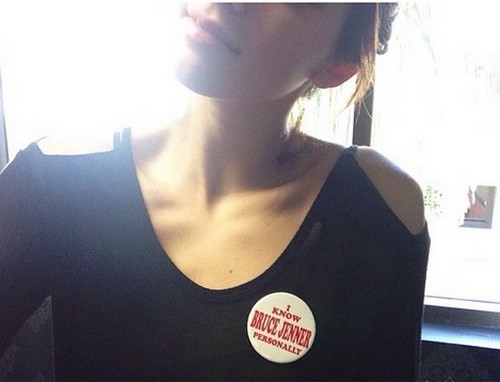 Another day, another set of Kendall Jenner risque photos hit the net.  Kendall decided to posted some photos to her Instagram account of a recent photoshoot she was in for NOMAD Two Worlds Foundation.   The foundation’s mission is to, “collaborate with Indigenous artists, and artists from marginalized communities, to create culturally relevant contemporary art and “meaningful luxury” consumer products which provide long-term economic benefit to the artists.”

In one of the photos Kendall appears nude except for some twigs and branches hanging over her head.  She posted it with the following message, “this head piece was no joke! nomadrj”

Kendall posted a second nude photo of herself to her Instagram from the same photo shoot with the message, “Had so much fun since I became a Nomad with my friends at http://www.nomadtwoworlds.com  . Hit the site to be…”

The photo was taken by Australian photographer Russell James who created the foundation to, “further the public’s understanding and appreciation of the world’s most threatened cultures and communities”  Although the photos are charity they really are a bit racy for a 17 year old.

Could all these nude and racy photos that Kendall has been posting recently mean that she is acting out since her parents announced their separation?  Kendall has always been a Daddy’s girl and she posted the photo above to her Instagram. In the photo she is wearing a button that says, “I Know Bruce Jenner Personally.”

Is this a message to Kris Jenner and the world she is supporting her father? What do you think are these photos too racy for a 17 year old?  Let us know your thoughts!