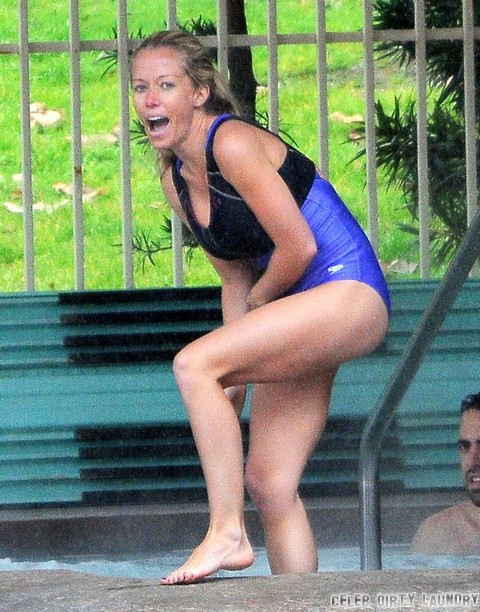 While the rest of you petition against Ben Affleck’s Batman opportunity, Kendra Wilkinson is dodging rumors of her relationship with Kim Zolciak. Both are two of the most ghetto blonds we know, well besides Coco, Ice – T’s ham hock. Kendra loves to party with rappers, and can twerk better than Miley Cyrus. Everyone was surprised when the urban Girl Next Door decided to jump the broom with NFL unknown, Hank Baskett.

Because we’re addicted to reality television and blondes with big boobs, Kendra dropped the trailer for WE TV’s ‘Kendra On Top’, to give us a little something to chew on.

“I shouldn’t even be married,” Wilkinson tells Baskett. In a thirsty attempt to hold on to his wife and only claim to fame, Hank replied “just be single and live together.”

“So you’re asking for an open marriage?” Kendra says. “I’ve been waiting for this day my whole life!”

Then, after she runs into an ex fling at the gym, that really adds a cognac shot to Blake Shelton’s Bacardi. “You’re the one who brought up open marriage,” she says while cringing in bed next to Baskett.

Hold up. Wait a minute. This is a classic case of Hollywood’s falling stars. Kendra was always more recognizable than her hubby, Hank. Kendra Wilkinson was their way into the snobby Hollywood shindigs, and reality show offers. Now that her star has faded, she’s bored with her husband. He is a step away from food stamps, but Hank was the only one who saw past her cheap tan, and straggly weave hair. Hollywood Z listers just treated her like clearance rack meat. Now that she had to sell her home, she realizes why he was so easily poochie whipped into marriage.

Who knows what will happen in this crazy Hollyweird town. If Dr. Phil can have a drunk tweet, and Justin Bieber wants a baby, you never know. Is it cool for Kendra to suggest Hank allow her to get smashed by someone else? If your marriage was as stale as Tim McGraw and Faith Hill’s, would you be open to an ‘open marriage’?