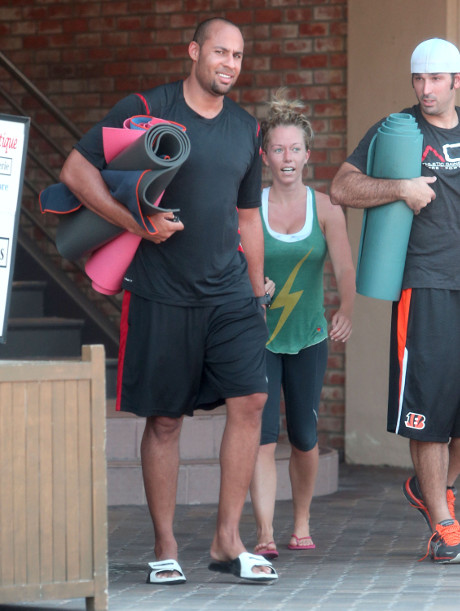 Kendra Wilksinson doesn’t mind if her daughter poses for Playboy. Does this surprise anyone? Wilkinson and her husband are currently trying to have another baby, and Kendra revealed that if she were to have a daughter, she’d expect her to be a ‘girl’s girl’ like herself. Of course, that also means posing for Playboy. Wait, what?

She explains, “If she was the person that I was doing Playboy, I would 100 percent say OK. If she is in a bad mental place [and has] a bad head on her shoulders and doing it under bad conditions, that’s different. I was very mentally there, I knew what I was doing, even though I had a little bit of fun, that was a choice that I made and I owned it. And I did nothing wrong … and it led me to my life today. Everybody has to go through little ‘finding out who they are’ stages.”

So, basically, because she did Playboy, she would be ok with her daughter doing playboy? What kind of twisted parenting is this? I suppose Kendra would then go on to call Playboy ’empowering’ and a whole bunch of other explanations that make zero sense.

This is why our world is going to the way it’s going. It’s because we have reality stars with low IQs continually reproducing and pushing their own idiotic ideals onto their poor children. Look at the Kardashians – it’s a perfect example. More and more families are becoming obsessed with fame and the shortcut to becoming rich, and nobody in this circle seems to care about hard work or family values any more.

What do you guys think about Kendra’s comments? Do you think any parent should ever encourage their child or even let them do something like Playboy? Let us know your thoughts in the comments.