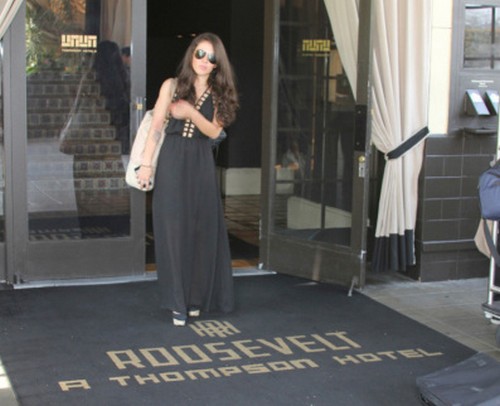 Polina Polonsky Says Lamar Odom Made It Perfectly Clear He Didn’t Want to Be With Khloe Kardashian and That Divorce Was Happening!

Lamar Odom’s most recent mistress to emerge from the closet has not only passed a lie detector test, but she also claims that Khloe Kardashian is well aware of the fact that he doesn’t want to be with her anymore! According to Polina Polonsky the 6 week affair with Lamar began on June 2nd, the night of Kim Kardashian’s baby shower and continued until mid-July. The LA based attorney told Radar Online that she didn’t think anything of getting involved with Lamar because he acted like a single guy and was very vocal about not being with his wife.

Polina spent nights with Lamar at The Roosevelt Hotel and he eventually joined her at her apartment for sleepovers. Khloe caught wind of where he was and at one point came pounding on Polina’s door. According to the brunette, who happens to look like a petite version of Khloe, Lamar refused to open the door to his wife and made it very clear that the marriage was finished. Khloe left eventually but then retaliated by investigating Polina’s family.

According to Polina her first hint that maybe the couple hadn’t completely split was when Khloe was at her door. She says that she couldn’t understand why this out of control wife was freaking out if the marriage was really done. As for taking the whole thing public, Polina makes enough cash on her own, she claims it’s not about a big payday but more about safety. After weeks of being afraid to go home for fear someone would be waiting for her, Polina decided that talking to the press might embarrass and push Khloe back away from her.

Do you believe that Polina thought the marriage was kaput? Call me crazy but I think I might believe Lamar played her! Tell us your thoughts in the comments below!