Khloe Kardashian Chooses Not to Dish Her Feelings on Lamar Odom — Doesn’t Deny Hooking up with The Game! (VIDEO) 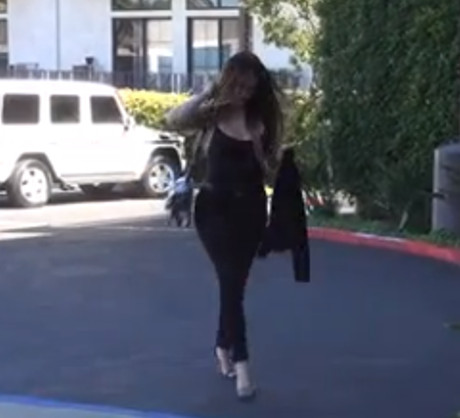 Khloe Kardashian arrived at work the other day looking super good, super fab, but not super in the mood to dish on her and Lamar Odom’s situation. In the video, captured by X17, Khloe is seen getting out of her car and walking into work while being questioned by a paparazzo.

The voice says, “Hey, Khloe, is it over with Lamar? Are you dating The Game?” For those who are a bit late to this drama party, Khloe Kardashian has recently been linked to The Game, a rapper, with whom she allegedly hooked up with at Tru Nightclub in Hollywood. The two were first linked together last spring. The Game was one of her workout partners, and the two reportedly forged a close friendship — as her marriage to Lamar began its downward spiral into crazy town. The rapper has an on-again-off-again fiance, but everyone seems to be a bit confused on their current status.

What do you think about the Khloe Kardashian & Lamar Odom relationship? Do you think they’re reportedly broken up, split for good? Or do you think she’s staying silent because they need their space to work things out? Let us know your thoughts in the comments section below!