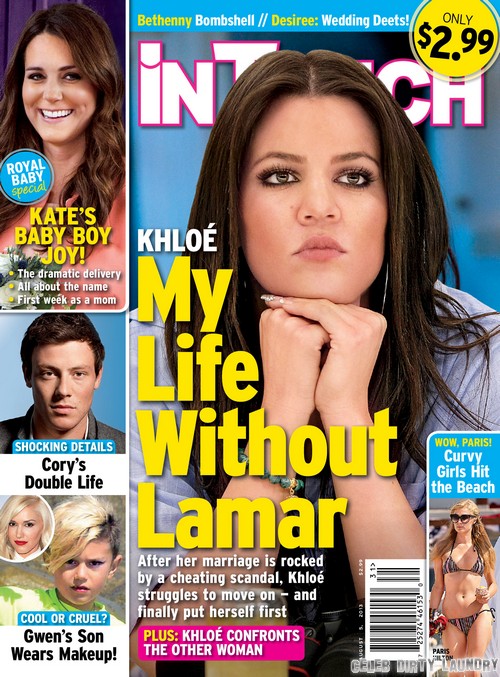 I have always thought that Khloe Kardashian might be the smartest chick in her entire family and it seems that her recent steps may prove me right. Rather than stick with a guy that disrespects her (Hello Kourtney!) or jump from one un-datable guy to the next (that would be Kim) she poured everything into her marriage to Lamar Odom. Unfortunately he hasn’t exactly done the same and it looks like his closet of hoes may actually be deeper than Tiger Woods.

According to the Aug. 5th print edition of In Touch magazine Khloe realizes that she deserves better and has not only kicked Lamar to the curb, but she has also confronted the woman that he was hooking up with for over a year, Jennifer Richardson! Apparently before deciding to put an end to the crap and to pull the plug on her failed marriage she had a few things to say to the side dish that her husband was throwing money at!

Also inside the new issue learn the latest details on the royal heir. While we still don’t know his name there’s a lot of behind the scenes info that has yet to be told.  Also this week details on Cory Monteith’s double life are starting to emerge. Supposedly he hid a lot of his problems from those closest to him, but obviously some people knew that he wasn’t at all clean and sober. Read more about his final days and you can also learn about Lea Michele’s reaction to her boyfriend’s death.

Are you glad to see that Khloe has a back bone and isn’t clinging to the man who treated her so badly? Tell us your thoughts in the comments below!

Woman Linked To Lamar Odom In Cheating Scandal Speaks Out