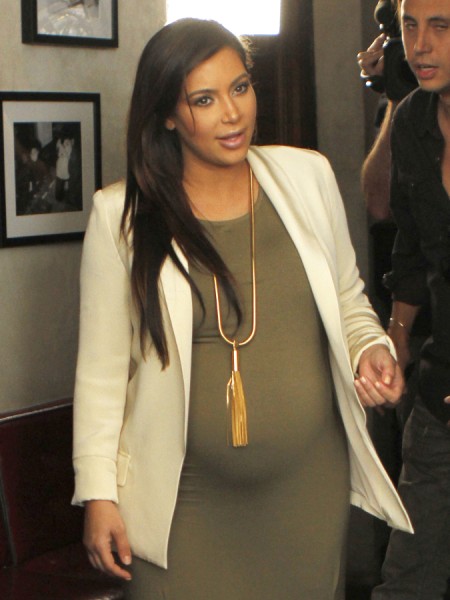 What? With only a month to go for Kim Kardashian you didn’t think Kanye West was actually going to stick around, did you? He’s got an album to promote (and a cheating scandal to brush under the rug). There ain’t no time for foot massages and couple cuddles.

Yes, we have Kim Kardashian alone again. How long did she have him to herself this time? A week? A few days? Just enough time for him to introduce us to a new rant and a new famewhore. And for that we are forever thankful. But the tides (and prospective music buyers) wait for no man and Page Six reports that Kanye left his eight-month pregnant girlfriend at home to perform a surprise concert at Art Basel in Switzerland. It’s a perfect combination in his eyes no doubt since he’s the greatest artist ALIVE.

But don’t feel bad for Kim. She inspires him being barefoot and pregnant and abandoned at home! You’ve obviously by now heard about his amazing NYT piece. Here’s one special quote about his Kimmy: “Any woman that you’re in love with or that loves you is going to command a certain amount of, you know, energy. It’s actually easier to focus, in some ways. Yeah, that’s what I mean when I say like, ‘Yo, I’m going to be super Zenned out like, five years from now.’ I’m the type of rock star that likes to have a girlfriend, you know? I’m the type of soul that likes to be in love and likes to be able to focus. And that inspires me.”

Does it seem like he’s focusing on Kim? Or is he saying having a girlfriend on lock-down allows him to focus more on his real priorities – like music? I don’t think you can really answer that question. Neither can Kanye.

So when do you think he’ll be back from Art Basel? Kanye West won’t rush back to Kim’s side, right? He’ll make a couple stops, visit some friends, maybe make more appearances. Why would he hurry home when he knows exactly where Kim is all the time just waiting and waiting and waiting….