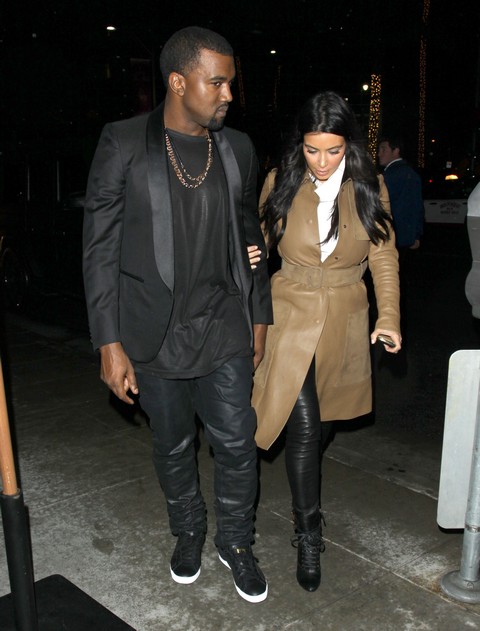 Expectant parents Kim Kardashian and Kanye West have let the word slip that they won’t be featuring their newborn K child on reality TV once he or she is born.  The infant’s life will be kept strictly private and will not be made a part of the Kardashian reality TV empire.  TMZ says that sources close to Kim tell them that she and Kanye don’t want their baby dragged into the family business.  What?  This lie is coming from the same people that had the father announce Kim’s pregnancy during his concert.  This piece of masterful publicity was no doubt orchestrated by Kris Jenner and perfectly planned for just before New Year’s Eve 2013 but long enough after Kate Middleton’s announcement to get maximum exposure.  As I told you yesterday, if you believe that this pregnancy announcement was a surprise to Kim then you just haven’t been paying attention.

Here is my version of what is really going on in the minds of the family that has stopped at nothing to gain fame and fortune.  Fearing an angry public backlash, Kimye claim that their newborn will not feature in the Kardashian reality TV empire.   Let’s repeat that – Kim and Kanye SAY that their little K baby won’t be part of the family business.  I don’t believe them – the baby will be featured as part of the Kardashain/Jenner/West reality/fashion empire from the second of its birth, just like all other aspects of the K clan’s life has been.

Sex, marriage, divorce, illness, operations (Kris Jenner’s plastic surgery), infidelity, have been incorporated and abused as part of the K enterprise.  Note that Kim even made sure the paparazzi were present when she emerged from her first public sleepover at Kanye’s New York apartment.  But Kris Jenner is smart enough to realize that it is in the Kardashian clan’s best interests to SAY that that they will keep the infant’s life off of the tube.  This will help the K’s to continue to garner the goodwill that comes naturally to a newly expectant mother, even Kim.  The Kardashians have for the moment escaped the opprobrium they typically enjoy and are experiencing a period of grace – they know that to tell the truth and admit that the little K critter will most certainly be another K prop would be unwise.

Meanwhile Kim’s people have made it clear that OF COURSE her pregnancy will be featured in detail on the Kardashian shows – in fact we know that Kim’s pregnancy will be the central theme.  But America can trust that the Dreikaiserbund of Kim and Kanye and Mama Kris would never use the newborn as part of the family business. We are expected to believe that upon its birth the baby’s existence will disapear from our TV screens, blogs, and media and become as mysterious and occult as the Notorious Blue Ivy Carter. This nonsense from the same people who brought us Kim’s sex tape and televised wedding to her current husband, Kris Humphries. Forget about it.  As soon as Kim gives birth, perhaps even while she is still pushing, the new K child will instantly become the most highly publicized newborn since baby Jesus.