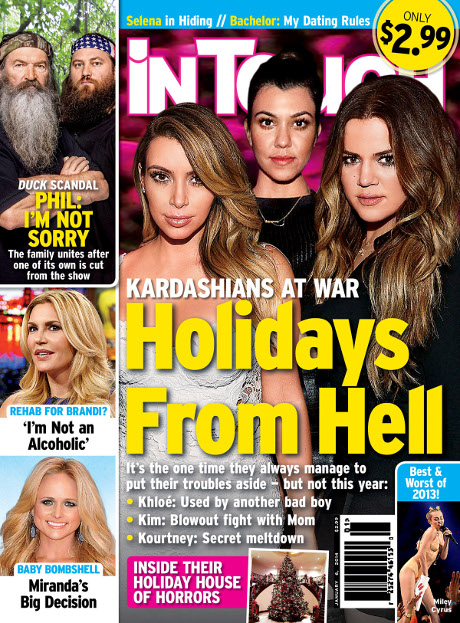 Remember how in previous years the Kardashians talked about how much they love each other and how important it is to be together for the holiday’s? Yeah, well, this year you can scratch that because there is so much in-fighting going on that they don’t need any outside interference to ruin things for them. According to the Jan. 6th print edition of In Touch, the ladies are all at war with each other, resulting in a very NOT-merry Christmas. Or, as the mag states, a “Holiday from Hell.”

Kourtney Kardashian is crushed because her baby daddy, Scott Disick, is putting everything before the family, like usual, and Khloe Kardashian is still reeling from her very public split from Lamar Odom. however, the deepest rift forming is probably between Kim Kardashian and momager Kris Jenner.

We have seen Kim slide out from under her mother’s thumb in order to be fully controlled by her crazy fiance, Kanye West. He has dressed her like a whore, cast her in his latest music video only to have it killed by critics, and hasn’t exactly encouraged Kimmie to be mommy of they year. She used to be the biggest bread winner and now Kris is losing her mind as the Kardashian Kollection is on the discount rack and their reality show is tanking. Kris no doubt is blaming Kim and Kanye for the slow but sure demise of the Kardashian brand and it’s one of the reasons that Kim is keeping her distance.

Fans of The Real Housewive’s of Beverly Hills have watched as Brandi Glanville throws back drinks left and right on camera. According to an interview with the latest issue of In Touch, Brandi insists that she’s not an alcoholic. I’m pretty sure her nemesis, LeAnn Rimes, is hoping that she is, don’t you think? Tell us your thoughts on Brandi’s boozing and the rapid decline of the Kardashian brand in the comments section below.