Kim Kardashian Obsessed With Breastfeeding, Natural Mother After All? 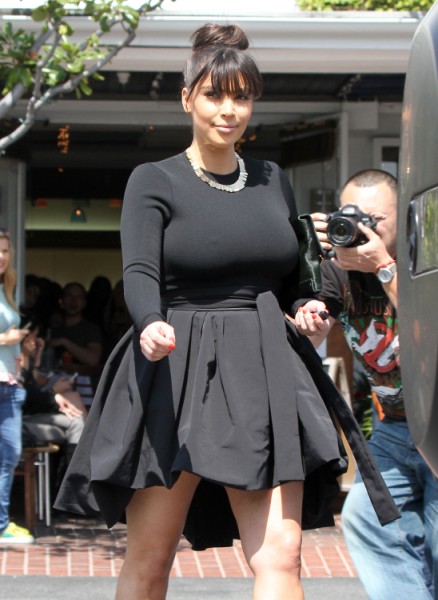 Well it looks like Kim Kardashian has taken to mothering like a pig in shit (sorry, I so rarely get to use that expression and it was too vulgar and fun to pass up at this point). Because we have to celebrate! Kim doesn’t share the Kris Jenner gene that makes her want to exploit her young for all they’re worth – at least not yet anyway. She’s all about the nourishment. TMZ reports that Kim is OBSESSED with breastfeeding and changing shitty diapers. By obsessed does it mean that she likes watching her nanny feed the baby with a bottle of sister Kourtney’s breast milk?

Afraid not. She’s putting her size G titties to good use finally. “She does it all,” one source said. And Kanye West’s not doing too shabby either. He’s all about little North West (I can’t tell you how much I hate typing that name).

I think we should take the time to acknowledge that – thus far – Kim isn’t the shittiest mother in the world. Granted, she’s only had a week or so to f-ck up and most of that time other, more responsibly, people have been around to make sure she fed the baby instead of shuffling through her twit pics (or getting her blow outs and mani/pedis). But it’s a start, right? Perhaps she won’t be totally inept. She’s got the rest of her life to ruin that kid’s psyche so it’s nice that there’s this little grace period.

Of course being the catty biotches that we are, we have to point out she’s probably only breastfeeding because she’s trying to race her uterus back into place before her Paris wedding. Kim Kardashian’s engaged and needs to skinny up in a hurry! Apparently she’s got until September so that’s plenty of time. So screw bonding with the baby via breastfeeding! Kim Kardashian needs it to suck out all that fat!