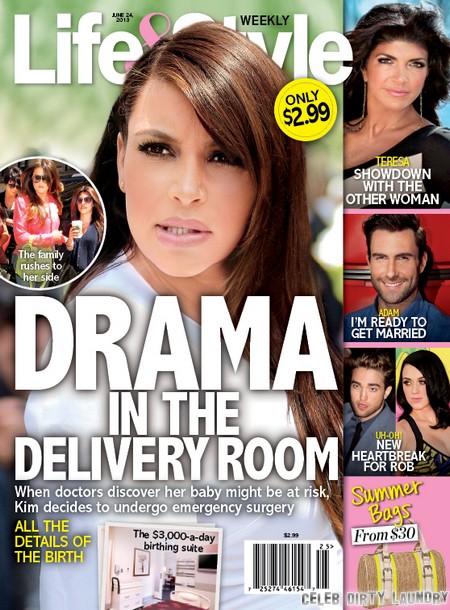 The latest Kim Kardashian pregnancy rumor is that she’s interested in having a Caesarian section, while baby daddy Kayne West thinks she should have a natural birth. Of course now that Kanye’s sex and cheating with Leyla Ghobadi has been exposed by Star I’m not sure just how much say Yeezy still has in the decision making process. Life & Style reports that the two have been disagreeing over the form of the birth.

The drama with this family never ends and we are forced to be on a continual roller coaster ride which needs to stop. The privacy of giving birth should be that and not a decision that is played out for public opinion. Kim’s decision on whether to have a vaginal birth or C-section birth should be hers alone. Giving birth to a child is not an easy task and I will never understand why someone would want to have a c section over a vaginal birth but we are talking about the Kardashian. The choice to choose the type of birth, the date of birth, the time of bith, and to control every aspect of birth is a play straight from momanager Kris Jenner’s reality handbook. As women we are aware it is SO much harder to recover from the C-section and the choice alone is a difficult one to make and maybe Kim is getting advice from sister Kourtney who has had two C-sections.

The source adds, “While Kim’s told Kanye that a C-section is what she wants, he’d prefer she did not have one. He wants an all-natural birth. But Kim feels like it’s her right to choose.”

Do you think Kanye could convince Kim to have a natural birth? If Kanye was having a baby with anyone else, we would say there’s absolutely chance he could reason with the mother of his child, but these are the Kardashians we’re talking about. Of course they’d do it. Heck, there’s a good chance this was Kim’s idea and not the doctors. According to Life & Style, friends of the couple say that Kanye’s worry stems from losing his mom to complications from elective surgeries – “He doesn’t want any unnecessary risk. As far as he’s concerned, surgery equals more danger.” West’s mom Donda passed away in 2008 after complications from breast augmentation and liposuction.

Does he have a point? Rumors are circulating that Kayne won’t even be in the delivery room so does he get to have a say? Are Kayne feeling valid and he is only looking out for the safety of his child and the mother of his child? Is this Kim’s decision alone to have a C- section? Please share your thoughts on this sensitive issue and a women’s right to choose!!!!