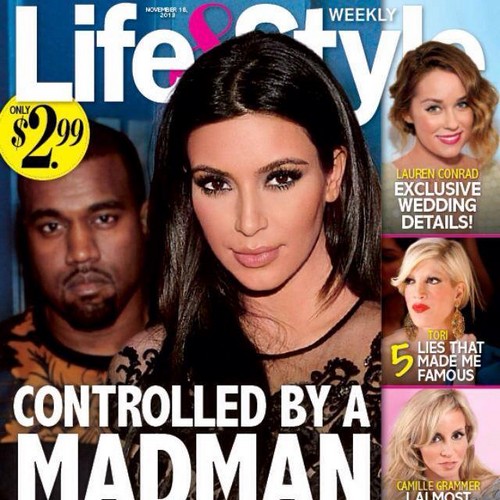 According to the Nov. 18th print edition of Life & Style magazine Kim is making a huge mistake by allowing herself to be reduced to Kanye’s arm candy. This guy has proven time and again that he is bonkers with some serious anger issues on the side. Previous girlfriends have discussed Kanye putting his hands on them and you have to wonder exactly what Kim has gotten herself into. We already know that he controls not only how she looks from head to toe, but also how their baby is dressed. They are like a monochromatic family and I have to wonder if Kim even realizes that his tastes never seemed to resemble hers until he started controlling things.

Kim seems to believe that Kanye will singlehandedly launch her into super stardom and make her a true Hollywood glamour girl. Instead the message continues to be sent loud and clear that Kimmie is still that video ho that Ray J whizzed on. Sources close to Kim worry that she is at risk and even Nori could be in danger around Kanye because when he flies off the handle no one is really safe from his wrath. Will Kim wise up and decide to reclaim her life or is she just too afraid to make her own decisions?

How about Tori Spelling admitting that she’s a big, fake liar? Her latest book details all of the things that Tori has said in order to make a fast buck that she then inevitably squandered! Life & Style has a few of Tori’s top lies that we all bought over the years and boy she is quite the BS artist, don’t you think? Tell us your thoughts in the comments below!