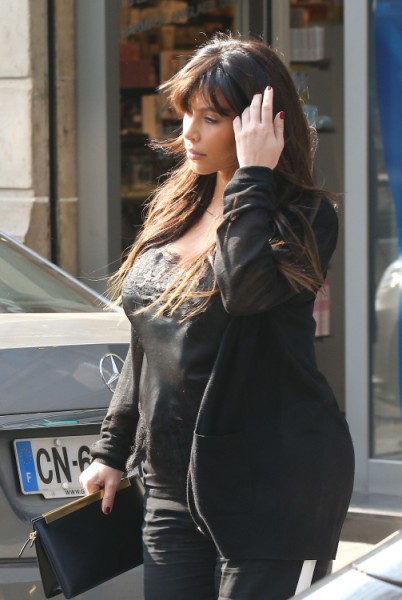 We ALL saw this coming, right? It looks like Kim Kardashian was only meant to be Kanye West’s “perfect bitch” for about a year. In that time he showed her off, knocked her up, got exploited by Kris Jenner’s attention-seeking machinations and then pulled the plug. Hell, I’m not a fan of his but I can’t blame him for deciding to hit the bricks.

Supposedly the couple has agreed to part ways but a well-placed MTO spy says that there won’t be an announcement coming until after the baby is born. Neither of these fame whores wants the inevitable bad press to torpedo either Kim’s reality tv projects or Kanye’s new album which drops this summer.  Plus I’m sure Kim has begged Kanye to keep his mouth shut because as of now she’s most famous for her ten minute marriage to Kris Humphries, she doesn’t want that to be replaced by being the way pregnant celeb who was so awful her rapper boyfriend dumped her.

We say Kimmie is famous for doing nothing but in a way it’s not true. She’s infamous for being a real piece of work that seems to be reaping what she sows.  If you have seen recent photos of Kim and Kanye together then you already know they aren’t happy. She is fixated on gaining weight rather than her baby’s health (that tells you what a self-absorbed mother she’ll be) and he always looks like there are a milion other places he’s rather be.

Obviously this is not what Kanye signed up for. He wanted the hot video chick to be the perfect red carpet accessory to his lifestyle. Instead he got trapped by a misery princess and will be paying for the next 18 years for it.

Are you surprised that this relationship is done? Tell us your thoughts in the comments below!